College Football: Games to watch in 2019 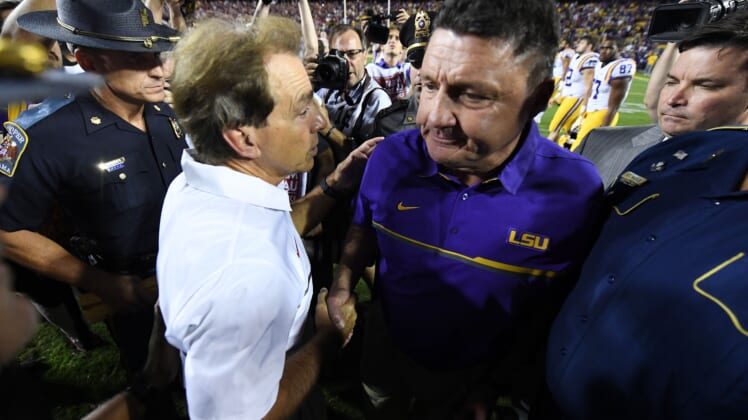 For the past four seasons, college football has been dominated by Alabama and Clemson, which have consistently looked a step above other teams. While the two are favorites to once again make it back to the College Football Playoff, a new season brings hope to teams across the nation that this could be their year.

Ahead of the 2019 season, there are a number of key matchups which could help determine which teams can truly challenge Alabama and Clemson.

Auburn vs. Oregon: The most exciting matchup in the first week of the season, the two teams will meet for the first time since Auburn’s victory in the 2011 National Championship Game.

Texas A&M vs. Clemson: Last year’s matchup was nearly an early stumbling block for the Tigers, as they narrowly escaped with a 28-26 win. Former Clemson quarterback Kelly Bryant still led the team at that time, but it’s all about Trevor Lawrence now.

Notre Dame vs. Georgia: With appearances from both teams in the College Football Playoff in the last two seasons, this Sept. 21 matchup has major postseason implications. Georgia narrowly squeaked out a 20-19 win in 2017, and now the Irish must travel to Athens, Georgia.

Texas vs. Oklahoma: The two bitter rivals met twice in 2018, as Texas pulled off an upset in the regular season, but Oklahoma claimed its revenge in the conference championship game. A similar story could repeat itself this year, as both teams are top-10 caliber and are a notch above the rest of the Big 12.

LSU vs. Alabama: Often an important matchup in the SEC West, last year’s Alabama-LSU matchup fell flat of some of the historic clashes between the teams. The Crimson Tide steamrolled the Tigers 29-0, but LSU did the end the year with an important win in the Fiesta Bowl.

Michigan vs. Ohio State: The Wolverines have had talented teams in the last four seasons, but Harbaugh was never able to defeat Urban Meyer in the rivalry game. Both teams have playoff aspirations, and “The Game” could once again determine which Big Ten team makes it to the playoff.

The bottom line: While the 2019 college football season may once again come down to Alabama and Clemson in the end, teams across the country are still vying for their shot at the title. The season kicks off with a top-15 matchup, and the best games of the year will continue all the way to rivalry weekend with “The Game.”