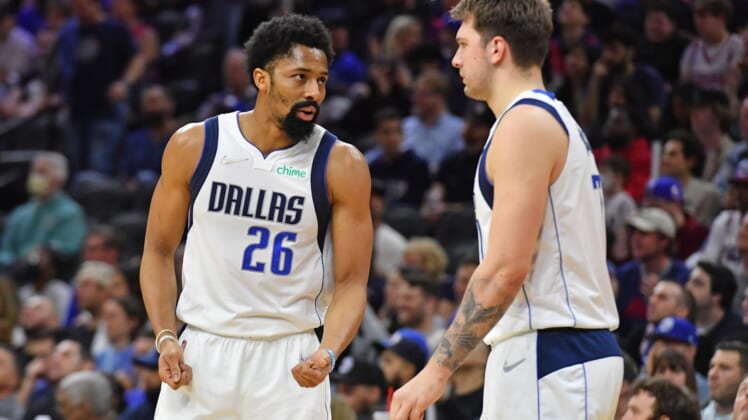 When Luka Doncic, the Mavericks’ do-everything savant, doesn’t have to do everything in order for Dallas to taste success, the optimism the Mavericks have generated of late feels validated.

Dallas used a collective effort Monday to slow the hottest team in the NBA and beat the Minnesota Timberwolves, 110-108. Even though the Mavericks will be without Doncic and Davis Bertans when they host the Houston Rockets on Wednesday, they’ve proved they are more than their undeniable superstar.

For the first time since April 23, 1989, the Mavericks had six players score at least 15 points: Dwight Powell (22), Spencer Dinwiddie (20 off the bench), Reggie Bullock (18), Dorian Finney-Smith, Jalen Brunson and Doncic (15 apiece). They rebounded from dropping back-to-back games for the first time since early February.

By his lofty standards, Doncic had a pedestrian showing Monday with 15 points on 5-of-17 shooting, six rebounds and 10 assists. He will sit out Wednesday to rest a sore right ankle.

Dallas has found strength in its defined roles, even when late-game lineups tend to fluctuate.

“I think that’s what makes the role definitions so important, because now, regardless of lineup, you know what your job is,” said Dinwiddie, who is averaging 17.6 points, 3.5 rebounds and 4.1 assists in 14 games since joining the Mavericks at the trade deadline.

The Mavericks are locked in a spirited battle for playoff seeding in the Western Conference, with four teams — Utah, Dallas, Denver and Minnesota — separated by 3.5 games in the loss column and the Timberwolves just a half-game behind the Nuggets for the sixth seed entering Tuesday. Every victory carries a certain significance, and Dallas appears to have gelled at the right time.

While Christian Wood and Jalen Green provided timely scoring for the Rockets in their 115-97 home victory over the Washington Wizards on Monday, the veteran contributions of Eric Gordon and Dennis Schroder proved instrumental in helping Houston erase what was a 23-point deficit.

Gordon drilled five 3-pointers and scored 15 points in his return from a four-game injury absence. Schroder, meanwhile, was the guiding force during a critical 16-0 run that bridged the third and fourth periods with six points, two assists and a steal over that nearly five-minute span.

“He has know-how and as I continue to say, he’s played in big games and all of that,” Rockets coach Stephen Silas said of Schroder. “He settles us on the offensive end and on the defensive end he applies so much pressure on the ball and has a way of not getting hit on screens and getting over and getting around. Really, really sound technique defensively. It was both ends for Dennis.

“It was also good to have Eric back. He’s a solid, solid basketball player and having him back was big for us.”