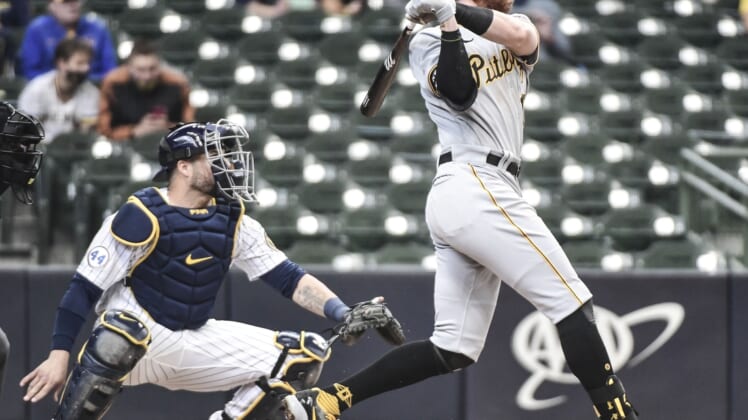 Colin Moran capped a big day with his fourth RBI on a double in the top of the 10th inning to lift the Pittsburgh Pirates to a 6-5 win over the host Milwaukee Brewers on Sunday afternoon.

With the game knotted at 5, Moran — who also had a three-run homer — doubled a pitch from right-hander J.P. Feyereisen (0-1) into the right-field corner to score Bryan Reynolds, who was placed on second to open the extra frame.

Making his fourth start, Pittsburgh right-hander Chad Kuhl gave up three runs and five hits over five innings. He struck out six and walked one.

Milwaukee’s Daniel Vogelbach had a strong outing by going deep twice and driving in three, and Avisail Garcia went 2-for-5 with a homer, two runs and an RBI. Bradley added two hits with a double and a run.

In the home half of the first, Vogelbach jumped on a 3-1 sinking fastball from Kuhl, and the 2019 All-Star belted his first home to center for 1-0 lead. Following a single by Garcia, Shaw made it 2-0 by doubling down the line in right to score Garcia.

Pittsburgh got to Peralta in the third when lefty-swinging Moran went the other way and clubbed a three-run homer. The inning was set up after a bases-empty, two-out walk to Phillip Evans and Reynolds’ double.

Garcia evened the game at 3 by launching a solo homer on Kuhl’s hanging slider in the third. It was the right fielder’s third homer this season.

Against right-hander reliever Brad Boxberger in the seventh, Reynolds swatted a 94 mph fastball to right into the second deck to cap a seven-pitch at-bat and score Adam Frazier for a 5-3 lead. The shot was estimated at 436 feet.

However, Vogelbach knocked another, also a two-run pop, in the bottom half off right-hander Chris Stratton for a 5-5 tie.