Colin Kaepernick on trade request: ‘We were looking at different opportunities’ 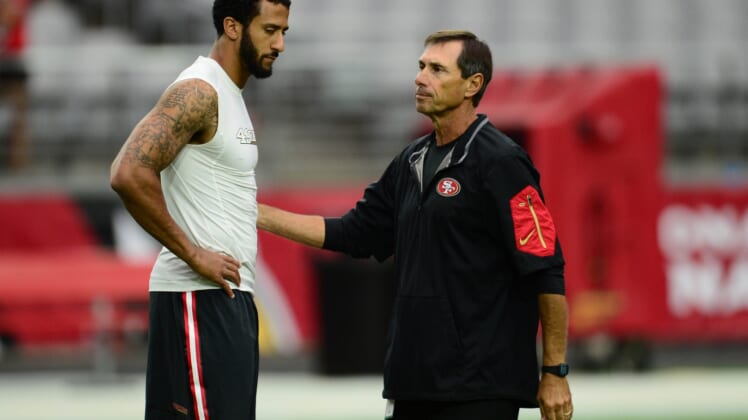 San Francisco 49ers quarterback Colin Kaepernick engaged with the media for the first time since his season-ending press conference to conclude the 2015 campaign.

Since his last meeting with the media, the embattled signal caller was almost traded to two different teams after his agents requested a trade. The team has also fired Jim Tomsula after just one season, only to replace him with an offensive-minded head coach in Chip Kelly.

Needless to say, things have changed a great deal since Kaepernick last made public comments on what led to last year’s disaster in San Francisco.

The quarterback’s first interaction with the media in six months occurred during San Francisco’s final day of off-season programs on Thursday.

Here’s some of what he had to say.

“What Chip, the coaching staff, my teammates have really done this offseason, and the work they’ve put in and how everything has been going, I’m very excited to be here,” Kaepernick said, via CSN Bay Area. “I’m very happy to be here. And looking forward to training camp.”

Now that Kaepernick wasn’t traded and figures to compete for the starting job this summer, this statement can’t be considered too much of a surprise. It was more of a company line thing.

Though, the former Super Bowl quarterback did address his trade demands, no matter how standoffish said comments might have been.

“Organizations at the end of the season go through and evaluate personnel and opportunities. That was something, I sat down with my team and did the same thing. That’s how we handled the business,” Kaepernick continued. “We were looking at different opportunities. I don’t want to get into specifics of what happened, why things happened. At this point, everything is football.”

He also wouldn’t get into specific regarding what led to the issues between himself and San Francisco’s equally embattled front office.

Kaepernick missed the majority of the 49ers’ off-season program after undergoing multiple surgeries following a disastrous personal 2015 season for him.

He’s now looking to put all this behind him. However, it’s going to take a ton of work on both sides in order for the hard feelings between the organization, his teammates and Kaepernick to be muted moving forward.

Kaepernick has one last opportunity to prove his worth as a starter in the NFL. It will come in a quarterback-friendly offense for a team that doesn’t necessarily have high expectations heading into the season.