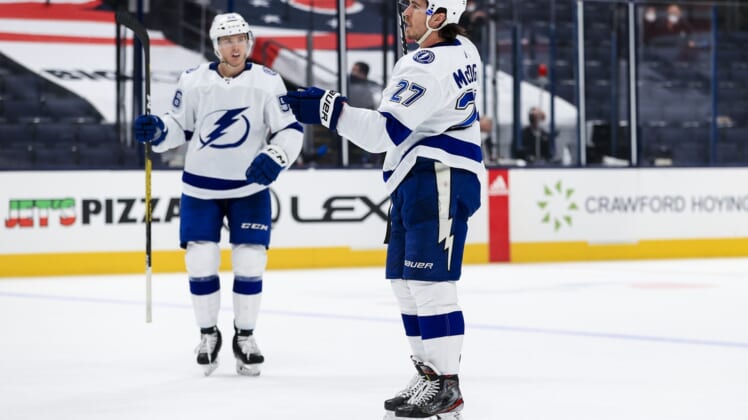 Having won just twice in their previous seven games, the Lightning opened fast with markers from Coleman, Steven Stamkos and Barclay Goodrow inside the first six minutes.

Ryan McDonagh registered the first of his two goals in the final second of the period for a commanding 4-1 edge for Tampa Bay, which improved to 3-3-0 against Columbus with the victory.

Yanni Gourde’s career-high four assists lifted him past the century mark for helpers in his NHL career (102).

Jack Roslovic produced a goal and two helpers, and Michael Del Zotto, Zach Werenski and Max Domi scored for the Blue Jackets, who slipped to 1-4-0 in their last five games.

With their early three-goal salvo, the Lightning chased Columbus goalie Joonas Korpisalo, who stopped just three of six shots. Elvis Merzlikins took over and made 21 saves, plus added an assist on Del Zotto’s goal.

In their last regular-season game in Columbus, the Lightning broke out of a scoring slump when Gourde led a two-on-one in the match’s first minute and saucered a pass that Coleman neatly put away for his eighth goal.

The visitors soon made it 3-0 within a one-minute span.

Stamkos notched his team-leading 17th goal on their first power play — his 10th on the man advantage — and Goodrow’s sixth tally at 5:41 ended the night for Korpisalo in favor of Merzlikins.

Del Zotto collected his third on a wrister to give Columbus some life at 17:21, but McDonagh’s last-second tally on a loose puck near Merzlikins left it 4-1 after one.

In the second, Colton’s momentum off an odd-man rush pushed in his sixth this season at 4:54 for a 5-1 lead, but Roslovic’s sharp-angle tally — his eighth — was matched by McDonagh’s second of the game at 18:56.

Werenski potted one in close at 10:41 of the third and Domi added another at 19:14, but the comeback fell short and the Lightning instead snapped their two-game losing streak.