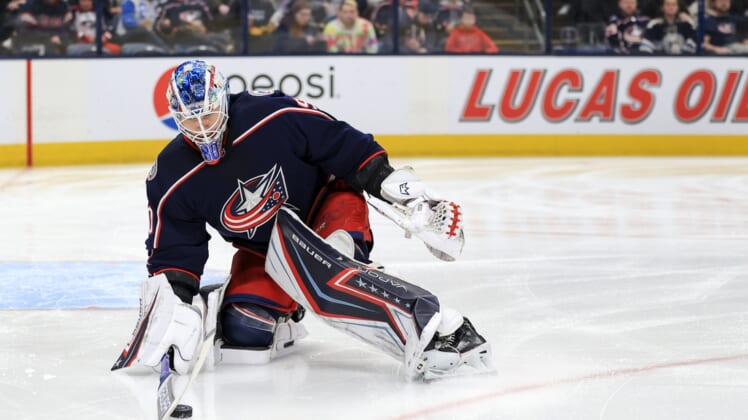 Cole Sillinger scored his first career hat trick and Oliver Bjorkstrand had a goal and three assists to lead the host Columbus Blue Jackets to a 6-4 victory over the slumping Vegas Golden Knights on Sunday night.

Patrik Laine and Eric Robinson also scored goals and Max Domi and Dean Kukan each had two assists for the Blue Jackets who won their second straight game. Elvis Merzlikins finished with 23 saves.

The 18-year-old Sillinger, a Columbus native who is the youngest player in the NHL, was the No. 12 overall pick of the 2021 NHL Entry Draft. His father Mike played with 12 teams over 17 NHL seasons, including two with the Blue Jackets.

Jonathan Marchessault had a goal and an assist and Jack Eichel, William Carrier and Evgenii Dadonov also scored goals for Vegas, which lost its fourth straight game and for the 10th time in 14 games. Logan Thompson, making his third career NHL start, stopped 32 of 37 shots while Chandler Stephenson added a pair of assists.

Columbus jumped out to a 1-0 lead at the 2:12 mark of the first period on a power-play goal by Laine, who one-timed a Gus Nyquist pass from the bottom of the left circle for his 23rd goal of the season.

But Vegas answered with two goals in the span of 4:10 to take a 2-1 lead. Marchessault got the first with a wrist shot from near the right faceoff dot, his 25th goal of the season. Carrier then picked up his seventh goal of the season when Nicolas Roy’s shot deflected off his skate and under Merzlikins pads.

Columbus answered with four consecutive goals, three of them by Sillinger. The first off a backhand pass from Bjorkstrand tied it. Bjorkstrand then made it 3-2 just 30-seconds later with his 21st goal of the season on a one-timer from above the circles that beat Thompson on his blocker side.

Sillinger then scored two goals in the span of 1:50 midway through the second period to extend the lead to 5-2. The first came on a deflection of a Bjorkstrand shot past Thompson’s glove side. The second came off a saucer pass from Domi for his 11th goal of the season and the hat trick.

Vegas cut it to 5-4 on goals by Dadonov and Eichel, the latter on the power play when he roofed a rebound of a Stephenson shot for his fifth goal of the season at the 2:14 mark of the third period.

The Golden Knights pulled Thompson for an extra attacker with 2:15 remaining but managed just a long slap shot by Shea Theodore that Merzlikins stopped. Robinson then sealed the victory with an empty-netter with 11 seconds to go.