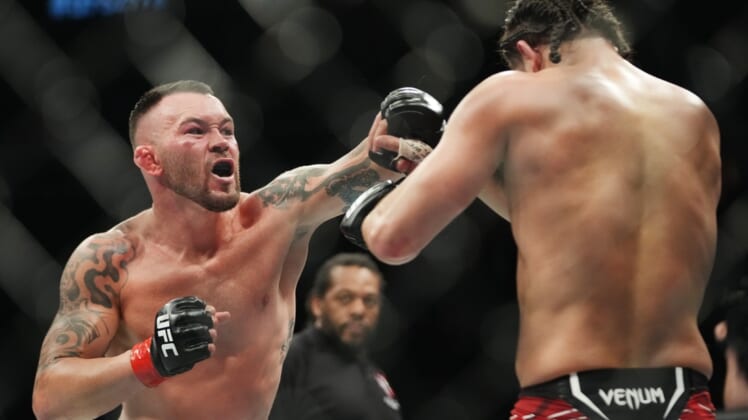 Colby Covington and Jorge Masvidal allegedly were involved in an altercation outside of a Miami Beach restaurant late Monday night.

The two UFC fighters are no strangers to one another, with Covington recording a lopsided unanimous decision over Masvidal on March 5 at UFC 272 in Las Vegas.

Covington, 34, and Masvidal, 37, renewed acquaintances outside of Papi Steak on Monday at approximately 11:30 p.m.

TMZ posted a video of Masvidal yelling, “Don’t talk about my kids,” while being prevented from getting closer to Covington.

Covington also is overheard in the video saying, “He’s over here swinging, trying to come at me, and I ran out the back of the room.” Covington then turned to social media star and podcast host Bob Menery and asked, “How would he even know I’m here?”

Earlier on Monday, Menery shared a video to his Instagram story that showed Covington and the group’s location, Papi Steak. Menery called Covington “the king of (expletive) Miami,” and wrote, “@papisteak is that spotttttttt.”

Masvidal then took to Twitter and added his own message while tagging Covington.

“Calling this the show-your-face challenge, you know? Um, what’s up? I’m from Dade County,” Masvidal said. “You talk that (expletive), you got to back it up. That’s how my city rolls, man.”

Menery later tweeted the following: “Never had a problem with (Masvidal). Extremely disappointed in the way he decided to handle his ongoing ‘beef’ that has already been decided in a regulated platform. @ufc.”