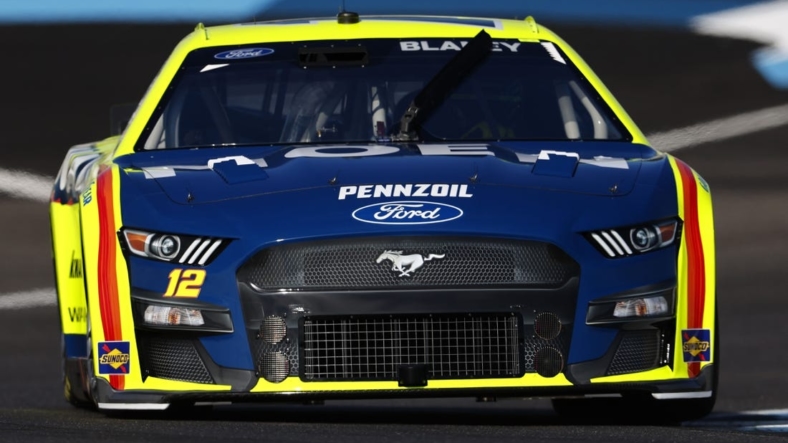 With Thursday’s news that Kansas race winner Kurt Busch will not participate in the playoffs while continuing to recover from injuries in an accident in July, that now leaves two playoff driver positions to be decided Saturday night.

The two highest-ranked drivers still without a victory this season are Ryan Blaney and Martin Truex Jr. Blaney, who just announced a contract renewal with the championship organization last week, holds a 25-point advantage on Truex.

Both drivers struggled a bit on the Watkins Glen, N.Y., road course last weekend — Blaney finishing 24th and Truex finishing 23rd. Blaney has only two top-10 finishes in the last five races of the season. His best finish of 2022 is a third-place at Nashville. Truex has three top-10s in the last five races. His best showing of the season is fourth place – at both Richmond, Va., and New Hampshire.

“Daytona is interesting,” the 2017 NASCAR Cup Series champion Truex said. “It hasn’t been one of my better tracks, but I really enjoy going there. In the Daytona 500 this year, we had a really strong car and led laps, won the first two stages and were feeling good about things. Then, we had an issue on pit road and had to go to the back and we were swept up in a crash.

“To me the strategy at Daytona is to just try to stay up front as much as possible or as close to the front as you can and hope that when the big crash happens, it’s behind you. That’s really the strategy; the only strategy is to try and stay up front. For us, as much of a wild card race as this is, I think we’ll have a good shot at winning and it’d be great to get our first superspeedway win with everything on the line. It’d be quite a story.”

There are 16 active former Daytona race winners entered this weekend. Denny Hamlin’s three Daytona 500 wins make him the winningest among those. Kevin Harvick is the only other active driver with multiple Daytona wins (2007 Daytona 500 and 2010 summer race).

There have been six new winners in the past six Daytona races, including Sunoco Rookie of the Year candidate Austin Cindric, who claimed the Daytona 500 trophy this February. The last 12 summer 400-milers have been won by different drivers. Nine of those are still active, including Harvick, Aric Almirola, Brad Keselowski, Ricky Stenhouse Jr., Erik Jones, Justin Haley, William Byron and Blaney.

BETS BETS
Bubba Wallace (+1200 at BetMGM)
Wallace has been the runner-up at Daytona in the past two races — finishing second to Blaney in a race that ended under caution last summer and runner-up to Cindric by a slight 0.036-second in this year’s Daytona 500.

Wallace, who still needs to earn a victory to advance into the playoffs, is having a strong summer. He had a career-best string of four top-10 finishes from New Hampshire to Michigan — including a second-place finish at Michigan after winning the pole position.

Daytona has been a strong point in his young resume, where three of his four career top-five finishes have been runner-up showings.

That has led to strong action on Wallace, who leads at BetMGM with 7.7 percent of the total bets backing him as his odds have shortened since opening at +1400. He has also drawn 7.8 percent of the handle, making him the sportsbook’s biggest liability.

Chase Elliott (+1000)
Elliott formally wrapped up his first regular-season championship last week. He boasts a series-best four wins this season, but is still looking for his first career Daytona victory.

“I think that it’s just a balance that you really have to try to find and it’s one that I can’t say that I’ve really found quite as good as those guys (Ryan Blaney and Denny Hamlin),” Elliott said. “You’ve got to have a knack for it. You’ve got to enjoy it and embrace it. To me, that’s kind of step one of figuring it out, just embracing it.

“I don’t know about the figuring it out part, but it’s been embraced.”

Blaney is second at BetMGM with 8.7 percent of the handle backing him and has also drawn 6.3 percent of the total bets. That has made him the sportsbook’s second-biggest liability this week.

Denny Hamlin (+1200)
Hamlin is one of several drivers being offered at +1200. He has been a popular choice, garnering the highest handle at 9.8 percent at BetMGM along with 4.9 percent of the total bets.