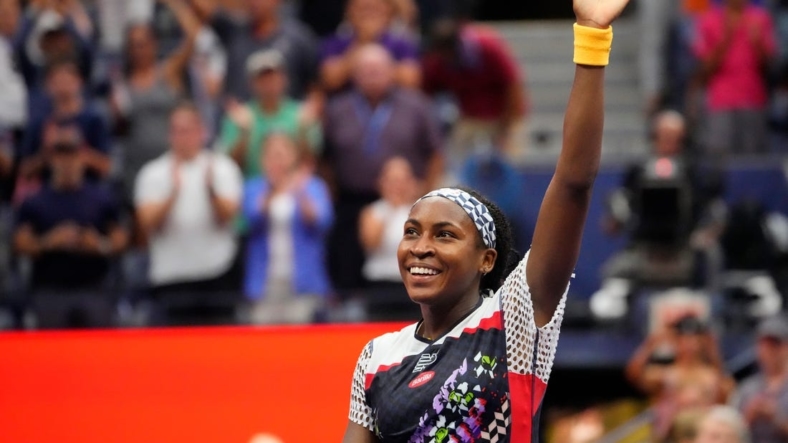 Coco Gauff won the final four games of the second set in impressive fashion on Sunday to claim her first career U.S. Open quarterfinal berth with a 7-5, 7-5 victory over Shuai Zhang of China in New York.

The 18-year-old American was one game away from going to a third set before she picked up the pace and stunned Zhang with the ferocious rally that brought intense cheers from the pro-American crowd.

The 12th-seeded Gauff had 33 winners and 25 unforced errors as she earned the right to face Frenchwoman Caroline Garcia, who beat Alison Riske-Amritraj 6-4, 6-1 in her Round of 16 match.

Gauff is the youngest American woman to reach the U.S. quarterfinals since Melanie Oudin (17) in 2009.

“It feels insane,” Gauff said of her victory. “Ashe Stadium chanting my name. I was trying not to smile on the bench in the last changeover. I was trying to stay in the moment and I was smiling like, ‘I can’t believe you guys are chanting like that.’ It’s crazy.”

Zhang had 26 winners and 29 unforced errors in defeat.

The 17th-seeded Garcia had eight aces while winning her 12th consecutive match.

She wasn’t fully on her game early but turned it on in the second set. Garcia had a 30-7 overall edge in winners.

“It was not always great tennis,” Garcia said, “but I managed my emotions a little bit better through the match, and the second set was really good.”

Garcia is 0-2 against Gauff and understands it will be a big challenge to win in front of a crowd that will be largely supporting Gauff.

“I’m really looking forward to it. It’s a great experience,” Garcia said. “I will get myself ready. I will have my little team behind me. That’s the most important — the people you care about who have been supporting you. I’m not going to complain to play in Ashe against an American girl in quarterfinals.”

Two other quarterfinalists will be determined Sunday night. Australia’s Ajla Tomljanovic, who defeated Serena Williams in the third round, will face Russian Liudmila Samsonova in one match.

Fifth-seeded Ons Jabeur of Tunisia will square off with 18th-seeded Russian Veronika Kudermetova in the late match.