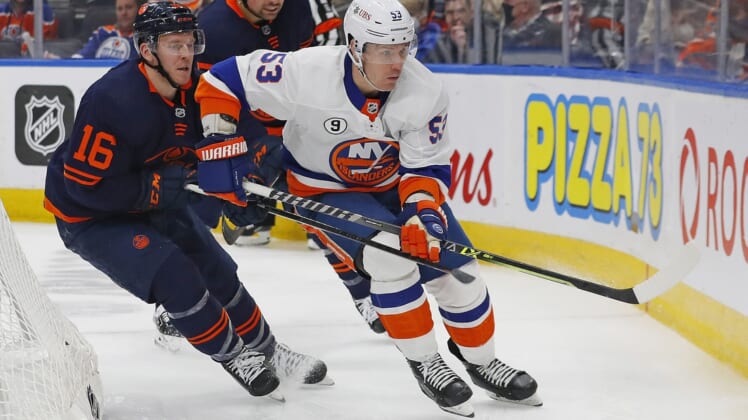 Hyman’s second period goal – the 100th of his career – went down as the game-winner for the Oilers, who lost 16 of their previous 23 games (7-13-3) before head coach Dave Tippett was fired Thursday and replaced by Woodcroft, who spent the previous three-plus seasons coaching the Bakersfield Condors, Edmonton’s affiliate in the American Hockey League.

Goalie Mike Smith made 37 saves for the Oilers, who entered Friday six points behind the Anaheim Ducks for the final Western Conference wild card spot.

Anthony Beauvillier scored a power play goal in the second for the Islanders, whose fifth loss in eight games (3-5-0) kept them 15 points behind the Boston Bruins, who occupy the final Eastern Conference wild card spot. Goalie Ilya Sorokin recorded 33 saves.

The Oilers were outshot 18-11 in the first period but took the lead on Ceci’s goal with 56.6 seconds left. Leon Draisaitl began the sequence with a pass off the boards to Connor McDavid, who headed into the right faceoff circle before dishing to Ceci, whose shot from in front of the blue line sailed by Sorokin as he was screened by Puljujarvi and the Islanders’ Cal Clutterbuck.

Hyman doubled the lead with his milestone goal just after the midway point of the second period. McDavid chipped the puck out of the Oilers zone to begin a 2-on-1 in which Hyman was accompanied by Philip Broberg with Islanders defenseman Ryan Pelech in the middle. Instead of passing to Broberg, Hyman fired a shot that sailed under Sorokin’s glove with 9:43 left,

A tripping penalty on Ryan McLeod generated the power play that ended with Beauvillier exchanging the puck with Ryan Pulock before firing a wrister into the far side of the net with 4:56 remaining.

A quirky goal allowed the Oilers to extend their lead to two goals 9:14 into the third. McDavid won a faceoff with Casey Cizikas but the puck bounced in the crease until Puljujarvi dove at it and shoved it past Sorokin from point-blank range.