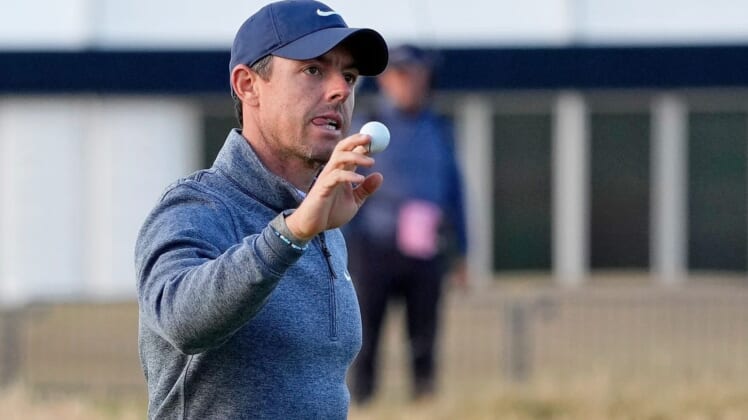 Rory McIlroy and Viktor Hovland dueled throughout the third round Saturday to separate themselves from the pack. Now co-leaders by four shots, they will square off for a second straight day to decide The Open Championship at St. Andrews in Scotland.

McIlroy, the four-time major champion from Northern Ireland, and Hovland, the rising star from Norway, carded matching rounds of 6-under 66 Saturday to finish the day at 16 under par. Hovland turned in the only bogey-free round of the day, while McIlroy thrilled fans by holing out from a pot bunker for an eagle on No. 10.

Both men birdied No. 18 to polish off their rounds and set up a Sunday showdown at the 150th playing of The Open.

Australia’s Cameron Smith led after two rounds but couldn’t keep his putter hot Saturday, shooting a 1-over 73. He and playing partner Cameron Young (71) ended up tied for third at 12 under.

McIlroy has not won a major since 2014. After top-10 finishes at the Masters, PGA Championship and U.S. Open earlier this year, the 33-year-old once again finds himself in position to end his drought.

Smith three-putted for bogey on the first hole and Hovland ran in four straight birdies at Nos. 3-6 to overtake him. Hovland tied Smith at the fourth hole when he made a tough 42-foot birdie putt sweeping right to left over a mound. A 19-footer at No. 6 gave the Norwegian a two-shot edge.

McIlroy birdied Nos. 5, 6 and 9 to draw within one shot of Hovland as the playing partners made the turn. McIlroy drove into a pot bunker at the short par-4 10th, but he lofted his second shot on line with the pin and it rolled in for eagle.

The shot vaulted McIlroy past Hovland to 15 under, but moments later Hovland converted a birdie to tie the lead. McIlroy’s two-putt birdie at the par-5 14th restored his advantage.

At the difficult No. 17, the “Road Hole,” both players’ drives missed the fairway and their approaches sailed over the green. McIlroy settled for bogey, while Hovland putted his third shot from off a walking path to set up a 4-foot par save, again pulling even.

Smith and Young each committed a costly double bogey on the back nine, damaging their already fading chances. Smith’s came at No. 13, where had to stand in a bunker to address his second shot out of the rough. Instead of laying up into the fairway, his knee-high swing only sent the ball 65 yards ahead.

Young’s double bogey went down as a four-putt at No. 16. His approach landed past the green, and his attempt to putt from there zipped past the hole and fell down the front slope of the green, setting up the calamitous score.

Scheffler made five birdies to counter two bogeys. The Masters champion could become the third player in history to win at Augusta National and St. Andrews in the same year, joining Nick Faldo and Tiger Woods.

Shane Lowry of Ireland holed out for consecutive eagles at the par-4 ninth and 10th holes for an improbable four-shot leap up the leaderboard. The 2019 Open champ cooled off down the stretch, shot a 69 and is part of a group at 7 under. Kevin Kisner also stands at 7 under after he shot a 65 for the low round of the day.