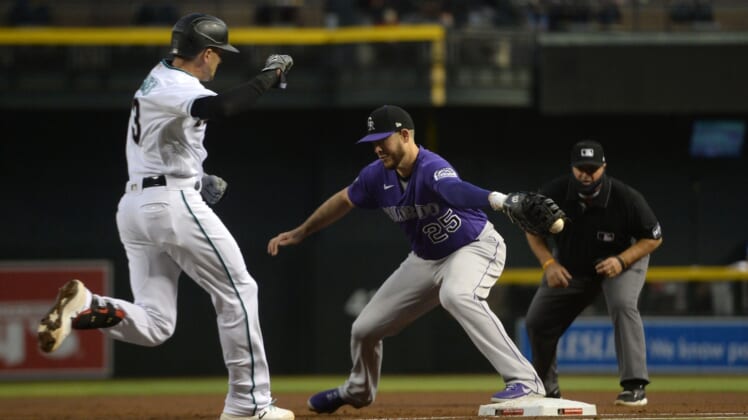 The Arizona Diamondbacks won for the ninth time in their last 11 games as Josh Rojas hit a home run for the second straight game against the Colorado Rockies in a 7-2 win at Phoenix on Friday night.

Colorado, 1-10 on the road this season, has lost four of its last five games including the first two this weekend against Arizona.

Rojas had only one home run this season before his two-run home run in the eighth inning and his solo blast Thursday.

After having 12 hits in the 5-3 win on Thursday, the Diamondbacks produced 11 hits on Friday, including two hits each by Asdrubal Cabrera, Carson Kelly and Eduardo Escobar.

Every player in Arizona’s starting lineup reached base at least once. The Rockies aided the output with four errors.

Veteran left-hander Madison Bumgarner (3-2) allowed four hits and one run with six strikeouts and a walk in five innings for the Diamondbacks.

Bumgarner was coming off a seven-inning no-hit performance at Atlanta on Sunday.

He gave up a two-out double to Trevor Story in the first inning that led to a run. Story scored when C.J. Cron followed him with a single.

The Diamondbacks rallied for four runs, three of them earned, against Colorado starter Jon Gray (3-2) in the third inning to take a 4-1 lead.

Arizona went through the order after Bumgarner led off the inning with a single to left field.

The Diamondbacks took a 5-1 lead in the fourth inning after again producing a two-out run-scoring hit when Cabrera reached on an infield single. The hit brought home Pavin Smith, who tripled with one out.

Bumgarner was relieved by Taylor Clarke to start the sixth inning.

Clarke was charged a run in the seventh after allowing a leadoff single to Josh Fuentes, who later scored on a single by Raimel Tapia off Alex Young that cut the lead to 5-2.

Gray allowed nine hits in six innings and had three strikeouts with one walk.