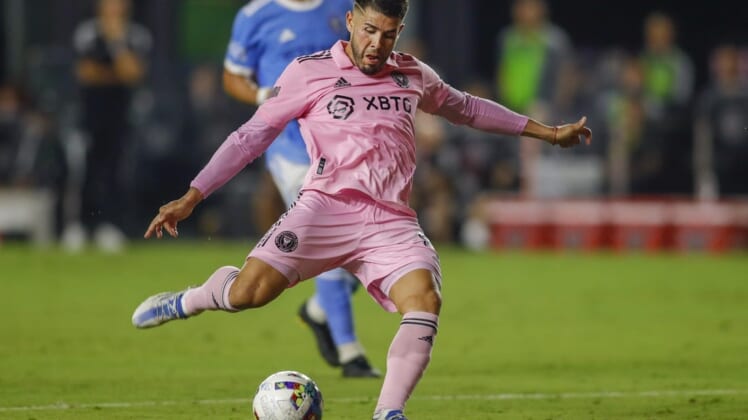 Inter Miami CF will look to leverage their home-field advantage in order to improve their playoff chances while playing host to surging Toronto FC on Saturday at Fort Lauderdale, Fla.

Toronto FC and Inter Miami are among nine teams separated by just five points in the East standings as the season moves into its final quarter. Those nine clubs are strung out from the fifth-place Columbus Crew to 13th place Atlanta United.

Inter Miami (9-10-6, 33 points) begins the weekend in eighth place and spot below the playoff line in the East. They are unbeaten in in their past four games and have just one loss in their past 10 MLS home games.

“The truth is we needed the three points,” Pozuelo said. “We understood the importance of the game and getting another three points at home to be able to keep the momentum going. I think we played a good game; we created a lot of chances.”

Inter Miami has won the past three matches with Toronto FC and has outscored the Reds 7-1 in those victories after losing the inaugural matchup between the teams.

“Right now, the dynamic of the team is good,” Pozuelo said. “It’s a group that gets along very well. The truth is that we are very united, and it shows on the field. We never give up. The team keeps fighting, and it shows.”

Toronto (8-12-6, 30 points) enters on the heels of a 2-2 tie at home against the New England Revolution on Wednesday. Federico Bernardeschi gave Toronto an early lead on a penalty kick, but it took Domenico Criscito’s ringing goal in the 75th minute to earn the draw.

Toronto FC are 3-0-2 in their past five games after settling for a spilt of the points against a shorthanded New England team that played conservative.

“It’s frustrating to leave two points on the table, especially at home,” Toronto midfielder Michael Bradley said. “But look, there’s still a lot of points on the board, and we’re in a good way, we’re on a good path and so we’ve just got to keep going.”

Toronto FC are in 11th in the East but would pull even with Miami with a win.