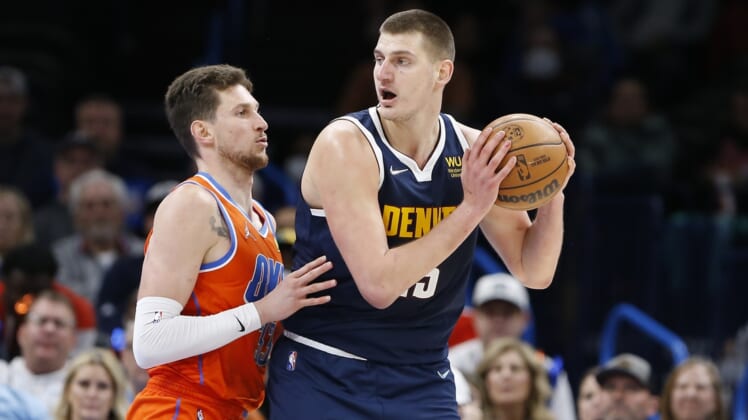 The reigning NBA MVP has put together eight straight double-doubles and has scored at least 20 points in 14 of the past 15 games. Jokic has three 20-point, 20-rebound efforts during the span.

Getting to see how Jokic operates has been an eye-opening experience for teammate Austin Rivers, who joined the Nuggets in mid-April of last season.

Rivers now sees the big man up close game after game and marvels at the decision-making between whether to shoot or pass.

“He sees the craziest defenses,” Rivers said after Sunday’s 99-95 road win over the Oklahoma City Thunder. “Between him and probably (Philadelphia’s) Joel Embiid, I don’t know who gets doubled like that. As soon as he touches it, he’s got like a swarm of guys around him, and he’s gotta make the right read every time.”

Jokic contributed 22 points, 18 rebounds and six assists versus Oklahoma City. His season averages of 25.8 points, 14.2 rebounds and 7.0 assists have him in the mix to win a second straight MVP award.

Rivers came through as well against the Thunder as he established season bests of 22 points and six 3-pointers as Denver won for the fifth time in seven games.

The effort from Rivers was certainly timely as he averaged 4.6 points on 9-of-32 shooting over the previous five games. He made 8 of 13 shots against Oklahoma City, including 6 of 8 from behind the arc.

“I think the big thing with Austin is sometimes you just got to catch and shoot instead of holding and sometimes dancing with the ball, and he did that,” Nuggets coach Michael Malone said. “When he was open, he shot the ball and he shot it extremely efficiently for us.”

Rivers faces one of his former teams in the Clippers on Thursday. He contributed 12 points when Denver posted a 103-100 win in Los Angeles on Dec. 26.

Jokic had 26 points, 22 rebounds and eight assists in that contest despite being just 9 of 24 from the field.

Eric Bledsoe had 18 points and 10 assists and Brandon Boston Jr. also scored 18 for the Clippers.

Los Angeles is struggling with just four wins in its last 13 games entering the rematch. The slide has dropped the Clippers to a game below .500 at a time when star forward Paul George is still approximately three weeks away from returning due to his elbow injury.

The Clippers defeated the Atlanta Hawks 106-93 on Sunday when they received a surprisingly strong effort from guard Amir Coffey.

Coffey was in the starting lineup for the sixth time this season and he had his best outing of the campaign with 21 points on 8-of-12 shooting, including hitting 5 of 8 from behind the arc. Both the points and 3-pointers made matched his career bests.

The third-year pro was needed in the starting lineup due to Luke Kennard missing his fifth straight game due to being in the COVID-19 protocol.

“I just always tell myself it’s a marathon,” Coffey told reporters of waiting for his turn to start. “There’s ups and downs. Good games and bad games, going back and forth. It’s about staying level-headed in good times and bad times. Don’t get too high or too low. I’m doing what I love.”

“We just can’t let that negativity seep in, even though it’s getting hard and we just can’t get mentally fatigued is the biggest thing,” Lue told reporters. “So we just got to keep fighting and grinding through it.”