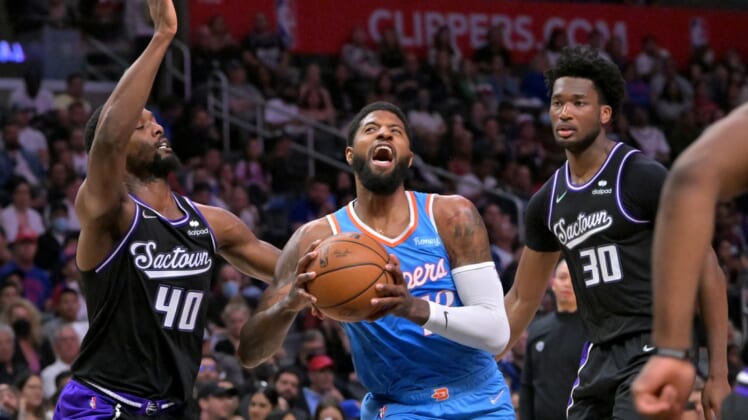 Paul George scored a team-high 23 points in 34 minutes Saturday night and the Los Angeles Clippers tuned up for their upcoming appearance in the NBA Western Conference play-in tournament with a 117-98 victory over the visiting Sacramento Kings.

Norman Powell chipped in with 20 points off the bench in his second comeback effort after a two-month absence for the eighth-seeded Clippers (41-40), who will visit the seventh-seeded Minnesota Timberwolves on Tuesday in the play-in opener.

The Clippers, who have won four in a row, close out the regular season at home on Sunday night against the Oklahoma City Thunder in a game that will mean little other than determining whether Los Angeles finishes the season at or above .500.

Davion Mitchell had a team-high 22 points for the Kings (29-52), who will get one final shot at a 30-win season Sunday night at Phoenix.

Playing for the fifth time since returning from an elbow injury, George nailed an 18-footer on the Clippers’ first possession and the hosts never looked back en route to sending Sacramento to a third straight defeat.

George added a 3-pointer and an assist as Los Angeles scored the game’s first nine points before going on to lead by as many as 17 in the first quarter and 20 in the second.

The Kings, who had won 124-115 at Los Angeles in December, got as close as seven on multiple occasions in the third period, before the Clippers spurted away again to as much as a 23-point advantage early in the fourth quarter and coasted home.

George shot 6-for-9 on 3-pointers to account for a majority of his points on a night when the Clippers went 21-for-43 from beyond the arc. Los Angeles outscored Sacramento 63-21 on 3-pointers.

All but one of the 12 Clippers who saw action in the game scored, with four others joining George and Powell in double figures. Ivica Zubac totaled 15 points as part of a double-double with a game-high 12 rebounds, while Marcus Morris Sr. added 11 points, and Isaiah Hartenstein and Luke Kennard 10 apiece.

Trey Lyles backed Mitchell with 15 points and Damion Jones had 12 for the Kings, who will miss the playoffs for the 16th consecutive season. Chimezie Metu was Sacramento’s leading rebounder with 10 to go with nine points.