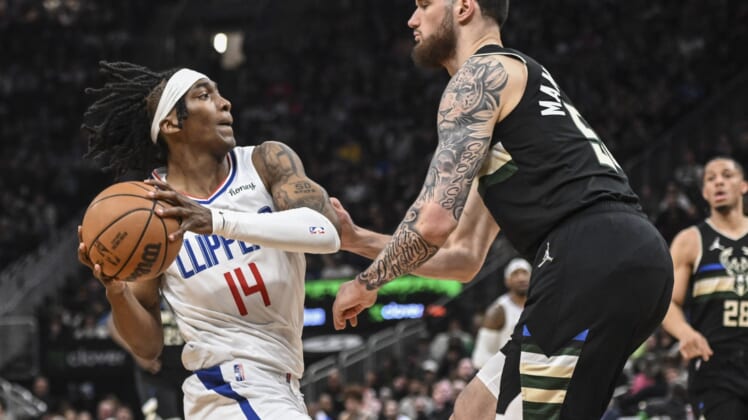 Robert Covington scored a career-high 43 points thanks to 11 3-pointers as the visiting Los Angeles Clippers routed the Milwaukee Bucks 153-119 on Friday night to snap a four-game road losing streak.

With four of Los Angeles’ starters out, Covington added eight rebounds and shot 15-of-24 from the field to hand the Bucks their first home loss since Feb. 26. His 11 3-pointers are the most in a single game in Clippers franchise history.

Los Angeles’ 153 points were also the most scored in a regular season game in franchise history, breaking the previous record of 152.

Covington was not the only one hitting from distance, as the Clippers netted a season-high 23 3-pointers and shot 53.5 percent from beyond the arc.

The Bucks’ defensive struggles were due in part to the absences of Giannis Antetokounmpo, Khris Middleton, Jrue Holiday and Brook Lopez, who were all ruled out hours before tip-off.

Los Angeles outscored the Bucks 21-8 over the final 6:16 of the first half to go into the break with an 11-point edge. Four of five starters scored in double figures, with Kennard leading the way with 17 points, while Coffey had 16.

The Clippers did a good portion of their work from 3-point range in the first half, sinking 10 of 19 shots from deep (52.6 percent).

Portis led all scorers with 18 points, and Nwora trailed closely behind with 16. Milwaukee did not have nearly as much success from distance, though, making just five of its 16 3-point attempts (31.3 percent).

Things spiraled out of control for the Bucks following halftime, as they found themselves down by 26 by the end of the third quarter.

In what was a high-scoring first quarter, the Clippers shot 59.1 percent from the field and went 5-for-9 from beyond the arc to jump out to an early 34-30 lead. Covington and Terance Mann each had eight points.