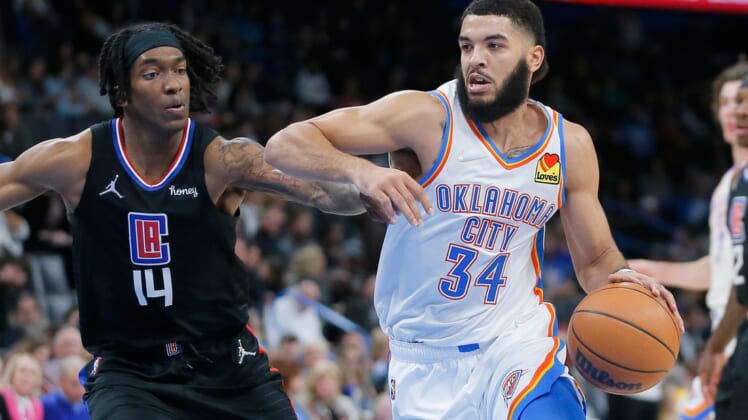 The Los Angeles Clippers and Oklahoma City Thunder have become accustomed to wrapping up the season against each other.

For the third consecutive season, the Clippers and Thunder will play in the regular-season finale when they meet Sunday in Los Angeles.

For the Clippers, the game is one final tuneup before advancing to the play-in tournament, where they’ll play on the road at Minnesota on Tuesday.

Los Angeles comes into Sunday’s game on a four-game winning streak, including Saturday’s 117-98 win over Sacramento.

The Clippers have been hit hard by injuries this season, including Kawhi Leonard missing the entire season and Paul George missing 50 games. But a win Sunday would ensure the Clippers (41-40) an above-.500 record for the 11th consecutive season.

“A, T-Lue is a hell of a coach; B, we have a hell of a roster; C, things would be a lot different if we were healthy,” George said of his coach, Tyronn Lue, and team climbing back into play-in position near the end of the season.

The Clippers are as healthy as they’ve been all season. George returned in late March and Norman Powell returned from a 22-game absence in Wednesday’s win over Phoenix.

The Clippers’ lineup Sunday will be a bit different, though, as Lue said George, Powell and Marcus Morris Sr. would sit out the game to stay fresh for Tuesday’s play-in game.

On the other side, the season will wrap up with the Thunder missing the playoffs for the second consecutive season.

The teams have split their first two meetings, with the Clippers winning 99-94 on Nov. 1 in Los Angeles and the Thunder winning 104-103 on Dec. 18 in Oklahoma City.

No one has benefitted from the Thunder’s late-season roster makeover as much as Jaylen Hoard, who was signed to a 10-day contract at the start of the month and has started four of Oklahoma City’s five games since.

In his first 33 NBA games over the last three seasons before this most recent stretch, Hoard averaged 4.7 points and 1.9 rebounds. But after spending the majority of the season with the Oklahoma City’s G League team, Hoard has averaged 17.8 points and 13.4 rebounds since joining the Thunder.

He’s had 17 or more rebounds three times during that span and averaged more than 38 minutes after never having played even 30 minutes per game before.

“He’s more confident,” Daigneault said. “The game’s slowed down for him a little bit more. He’s always been a smart player, but the speed of the game is different.”

Hoard’s performance might not earn him a long-term spot with Oklahoma City (24-57), but it could get him a look elsewhere in the league.

“I’m seeing where I got better from last year,” Hoard said, “and I’m also seeing what I can work on.”