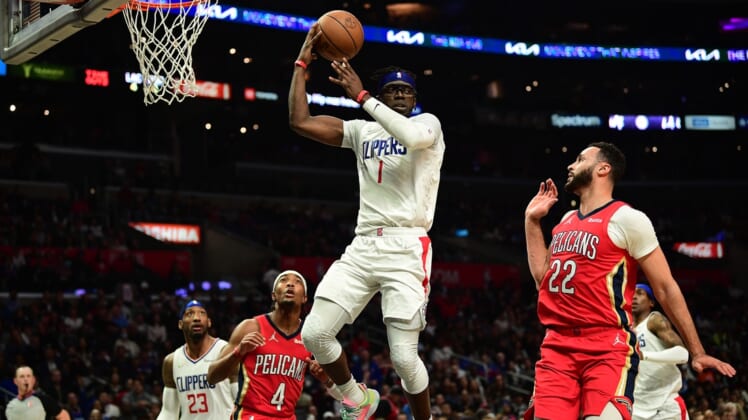 The New Orleans Pelicans began the campaign by losing 12 of 13 games and they haven’t seen Zion Williamson on the court all season.

That’s not typically the recipe for making the playoffs but the Pelicans are on the doorstep of advancing to the 16-team field. They visit the Los Angeles Clippers on Friday night in a play-in contest that will decide the final Western Conference postseason berth.

A midseason acquisition of guard CJ McCollum from the Portland Trail Blazers helped New Orleans get off the mat. The club has won nine of its past 14 games entering the showdown with the Clippers.

The Pelicans beat the visiting San Antonio Spurs 113-103 in their Wednesday play-in game, while Los Angeles was outplayed late in the game by the host Minnesota Timberwolves and fell 109-104 in its first play-in game Tuesday.”

The Clippers opened as 3.5-point favorites at BetMGM and the line has held steady despite 80 percent of the spread-line bets and 94 percent of the handle backing Los Angeles as of Thursday afternoon. The 4.0-point line at DraftKings has also seen one-sided action toward the Clippers at 64 and 57 percent, respectively.

The winner of Friday’s game will play the top-seeded Phoenix Suns in a best-of-seven first-round series. Game 1 is Sunday night.

The Clippers have been without Kawhi Leonard (ACL) all season, so they won’t be feeling sorry for the Pelicans being without Williamson (foot).

But New Orleans was able to overcome the absence of their star player and go on a late-season surge to claim the No. 9 spot in the Western Conference, while the veteran Los Angeles Lakers collapsed and missed the play-in round.

Count forward Brandon Ingram among the players pinching themselves over the team’s rise.

“It shows how far we came, starting off 1-12,” Ingram said after Wednesday’s win. “Having a chance to make the playoffs is a blessing. We just have to keep going, keep our focus.”

McCollum set the tone for the victory by scoring 27 of his 32 points in the first half. The former sidekick of Damian Lillard at Portland is displaying he can function quite well as the lead scorer.

“This is the start of something special, for sure,” McCollum said. “You see the energy. Feel the energy. … There’s a lot of talent here. We’re playing the game the right way. It’s going to be a lot of winning in our future.”

The Clippers were one of the final four teams standing last season before falling to the Suns in six games in the Western Conference finals.

But the club has often been in disarray this season with Leonard sidelined and fellow star Paul George missing more than three months with an elbow injury.

The contest against Minnesota was George’s sixth since returning and he poured in 34 points while making six 3-pointers.

Los Angeles led by 10 points with 8:54 remaining before the Timberwolves took control with a 16-2 surge. Most of that run occurred after Minnesota star Karl-Anthony Towns fouled out with 7:34 left.

“They played a lot better without KAT on the floor,” Clippers coach Tyronn Lue said. “They got into us defensively. They switched on a lot more stuff. I just didn’t think we made the right plays.”

Lue and George were both quick to say the Clippers needed to set aside the disappointing setback in the team’s second-chance play-in game.

“That’s our focus now,” Lue said of the must-win contest. “Got one game to win to get into the playoffs. We’ll be ready to go on Friday.”

The Pelicans went 3-1 against the Clippers this season with the victories coming by an average of 18.7 points. Los Angeles won the final meeting, 119-100 at home on April 3.

The Clippers hope to have backup guard Luke Kennard (hamstring) back. He sat out the game in Minnesota after being injured in the regular-season finale against the Oklahoma City Thunder.