Cleveland Indians get by Minnesota Twins to open doubleheader 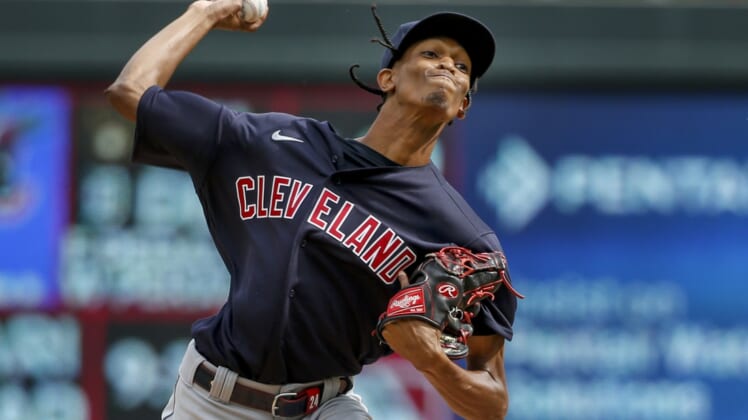 Bradley Zimmer homered and scored two runs and Triston McKenzie allowed one run over six innings to lead the Cleveland Indians to a 3-1 victory over the Minnesota Twins in the first game of a doubleheader on Tuesday afternoon in Minneapolis.

Harold Ramirez went 2-for-3 with a run scored for Cleveland (70-72) which snapped a three-game losing streak and won for the second time in the last eight games.

McKenzie (5-6) allowed three hits and a walk while striking out seven to pick up his fourth win in his last five starts. Emmanuel Clase pitched a 1-2-3 seventh to notch his 23rd save.

Andrelton Simmons had an RBI double for Minnesota (63-82), which lost its third consecutive game. Danny Coulombe (3-2) suffered the loss.

Twins starter Joe Ryan, who pitched 6 1/3 perfect innings in his previous start against the Indians, gave up one run on three hits over five innings, but he left the game after taking a 92.7 mph comebacker by Myles Straw off the back of his right wrist to open the sixth. Ryan, who walked one and struck out five, immediately walked off the mound and into the locker room while flexing his hand. Twins manager Rocco Baldelli called the injury a wrist contusion after X-rays were negative.

Minnesota took a 1-0 lead in the third inning when Ben Rortvedt singled and came around to score on a double by Simmons to left that sliced past a sliding Harold Ramirez and rolled off the wall. Rortvedt barely beat the relay throw with a head-first slide. The Indians challenged the safe call at the plate, but the call was upheld after a review.

Cleveland tied it 1-1 in the fifth on Zimmer’s seventh home run of the season, a 451-foot blast off the back wall of the second deck in right.

The Twins had a chance to regain the lead in the sixth when pinch-hitter Josh Donaldson led off with a line-drive double off the top of the fence in left-center. But McKenzie rebounded to get Luis Arraez to line out to center, strike out Byron Buxton for the third time in the game and get Jorge Polanco to fly out to center to end the threat.

The Indians then took a 3-1 lead in the seventh when four straight batters reached base against Coulombe. Harold Ramirez started the rally with a single to center and Zimmer followed with a walk. Hedges drilled a double off the bottom of the left-field wall to drive in Ramirez with the go-ahead run. Pinch-hitter Yu Chang then drove in Zimmer with a hard grounder that handcuffed Arraez for an error.