Cleveland Indians come from behind to down Royals 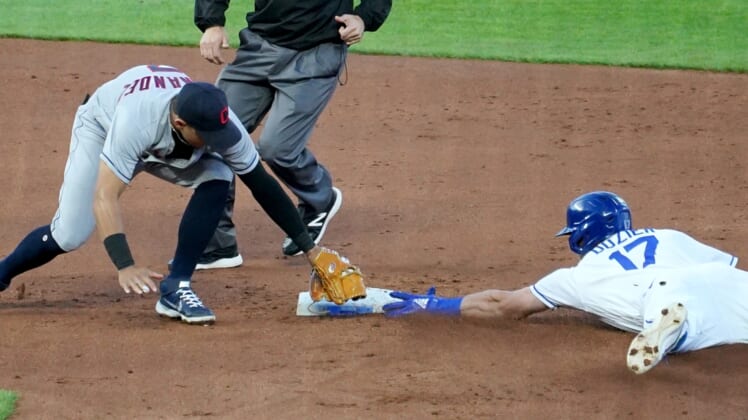 The Indians, who scored four runs in the eighth, have won each of the first two games in the four-game series, and they have three consecutive victories overall.

The Royals squandered a 3-0 lead while losing a third straight game for the first time this season.

With one out in the eights, Cleveland’s Franmil Reyes was down 0-2 before coaxing a walk from Josh Staumont (0-1). Reyes went to second on a wild pitch and scored on Ramirez’s double. Ramirez came home on Josh Naylor’s RBI single, and Naylor scored on Jake Bauers’ pinch-hit home run off Tyler Zuber.

The Royals jumped in front in the second inning on Michael A. Taylor’s RBI single. The hit knocked in Hunter Dozier, who was on base after a one-out double.

Kansas City added another run on a bizarre play in the third. Whit Merrifield and Andrew Benintendi both singled and pulled off a double steal, leaving runners at second and third. Salvador Perez hit a fly ball to right-center. The ball dropped between the outfielders, and the runners weren’t sure if the ball was caught because the umpires made no signal. Perez was awarded a single, scoring Merrifield.

Perez got another RBI in the fifth when he hit a 460-foot home run into the second level of fountains in left-center. Perez tied and passed John Mayberry for ninth all-time in Royals history with 553 RBIs. Mayberry had 552.

The Indians tied it with three in the sixth. With the bases loaded and one out, Reyes’ groundball scooted under the glove of shortstop Nicky Lopez for a two-run error. Ramirez drove in the tying run with a single.

Dozier ended the night with two doubles, giving him six extra-base hits in the past three games. Nine of his past 10 hits have gone for extra bases.