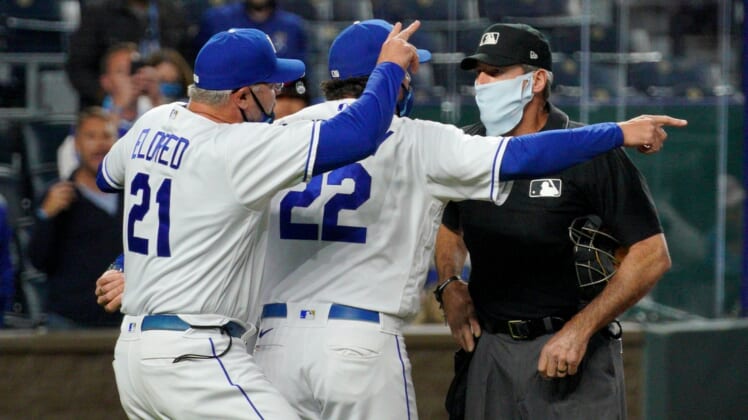 Josh Naylor’s leadoff home run in the top of the ninth inning lifted the Cleveland Indians to a 5-4 victory and their third straight win over the Kansas City Royals to start the four-game series.

The Indians came back from a 4-0 deficit after five innings. They have come from behind in all three of the wins.

Nick Wittgren (2-1) picked up the win after he struck out the side in the eighth inning. James Karinchak then picked up his third save in four tries. Wade Davis (0-1) took the loss.

Hunter Dozier put the Royals on the board in the second inning with a 430-foot home run to left center. Dozier’s last seven hits, and 10 of his last 11, have been for extra bases.

Ryan O’Hearn scored on an error by shortstop Andres Gimenez in the fourth, and the Royals scored two more runs on Jorge Soler’s double in the fifth. The hit came after Andrew Benintendi led off with a single, and Salvador Perez was hit by a pitch with one out.

The Indians finally got to Singer with three runs in the sixth. Singer walked Jake Bauers with one out and hit Jose Ramirez with a pitch, setting up Eddie Rosario’s double to left center that scored them both.

Singer then walked Franmil Reyes and followed that with a balk. That prompted Royals manager Mike Matheny and pitching coach Cal Eldred to argue hard and long enough to be ejected by home plate umpire Angel Hernandez.

Josh Naylor then drove in Rosario with a groundout to first. Scott Barlow relieved Singer, who also was tossed by Hernandez on his way to the dugout.

Jose Ramirez’ ninth homer of the season tied it for Cleveland in the eighth.