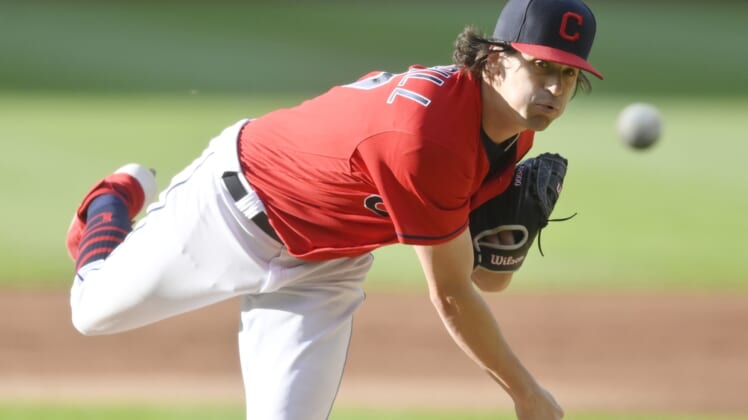 Eddie Rosario drove in two runs and Ernie Clement recorded his first major league hit for the Indians, who have taken the first two of this four-game set while winning for the sixth time in seven at home.

Cleveland also benefited from more poor defense by the Orioles, who committed four errors and have nine in the last four games.

Matt Harvey (3-8, 7.76 ERA) failed to complete four innings for Baltimore, which has dropped six straight overall and hasn’t won on the road since John Means’ no-hitter at Seattle on May 5.

With the game tied at 1-1, Cleveland broke things open and chased Harvey in the fourth.

Josh Naylor opened the frame with a double and scored on Cedric Mullins’ wild throw to the plate on Clement’s single. Run-scoring singles from Bradley Zimmer and Amed Rosario followed, the latter knocking Harvey out of the game.

Eddie Rosario’s two-run double to right field officially closed the book on Harvey, who was charged with six runs — five earned — and six hits while walking two over 3 1/3 innings.

One night after the Indians took advantage of two Baltimore errors in a 4-3 win, they made the visitors pay for second baseman Stevie Wilkerson’s first-inning error on a relatively routine grounder with two outs and a man on. Bradley followed with an RBI single.

The Orioles tied it at 1-1 with Maikel Franco’s two-out, run-scoring double off the left field wall. With Baltimore down 6-1 in the fifth, Trey Mancini drove home Mullins with a double.

Bradley, who had been 7-for-17 with seven RBIs in his last five games, added some insurance with his third homer of the season, in the seventh.

Cal Quantrill, a reliever pressed into starting duty due to the Indians’ injury issues, allowed one run and three hits and struck out four without a walk over four innings.