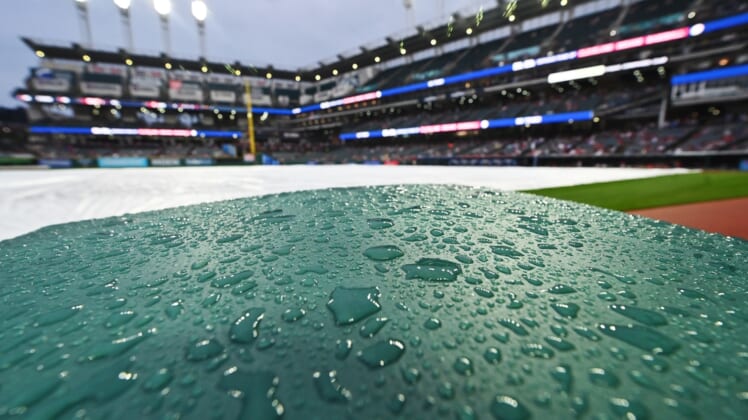 Jun 29, 2021; Cleveland, Ohio, USA; Rain collects on the protective barrier at at Progressive Field as the game between the Cleveland Indians and the Detroit Tigers is delayed. Mandatory Credit: Ken Blaze-USA TODAY Sports

The Cleveland Indians’ scheduled home game against the Detroit Tigers was postponed Tuesday night due to inclement weather.

The teams will make up the contest as part of a traditional doubleheader on Wednesday. The first of the two seven-inning games will begin at 4:10 p.m. ET.

The Indians won the opener of the three-game series 13-5 on Monday, just Cleveland’s second victory in five games. The Tigers had won five of their previous seven before the Monday defeat.

The postponement was the second in less than a week for both teams.

The Tigers were rained out at home against the Houston Astros on Friday, then made that contest up as part of a Saturday doubleheader that the teams split.

The Indians had their Saturday road game against the Minnesota Twins rained out. That game will be played as part of a Sept. 14 doubleheader.