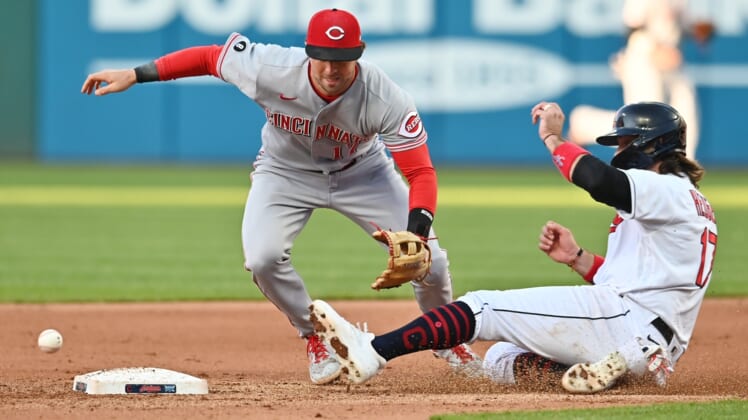 Cesar Hernandez’s bases-loaded triple highlighted a four-run fourth inning, and the Cleveland Indians broke out a night after being no-hit for a 9-2 victory over the visiting Cincinnati Reds on Saturday.

Jose Ramirez — who had a two-run double during a three-run sixth — Jake Bauers, and Josh Naylor each recorded two of the 11 hits for the Indians, who bounced back after Wade Miley became the second pitcher to no-hit them this season in Friday’s 3-0 loss. Hernandez’s liner down the right field line that cleared the bases broke open a 3-1 game.

It was the 10th win in 13 games for Cleveland, which got seven strong innings from Aaron Civale (5-0, 2.91 ERA). The right-hander set a career high for wins while allowing one run, five hits and two walks while striking out five.

Meanwhile, Cincinnati’s Luis Castillo (1-4, 6.42) was unable to carry over any momentum from Miley’s performance in dropping his third straight decision. The right-hander yielded six runs — four earned — and five hits over four innings. He struck out two and walked two.

Ex-Indian Tyler Naquin’s ninth-inning homer was the offensive highlight for Cincinnati, which had won six of nine but has totaled six runs over the last four games.

It took the Indians until the sixth inning Friday to put their first runner on base, but they needed only two batters Saturday. Castillo walked Amed Rosario, who scored on Eddie Rosario’s double off the left field wall for a 1-0 Cleveland lead.

The Indians took advantage of some poor Reds defense to make it 2-0 in the bottom of the second. Naylor led off with a walk and Naquin dropped a rather routine fly ball to center field off the bat of Bauers. Naylor eventually scored on Andres Gimenez’s sacrifice fly.

Cincinnati cut that deficit in half on Mike Moustakas’ third-inning sacrifice fly; however, the Indians used three straight singles from Naylor, Bauers and Austin Hedges to make it a two-run game in the bottom of the fourth. Following an error by Reds shortstop Kyle Farmer, Hernandez delivered the game’s decisive moment.