Cleveland Browns quarterback Baker Mayfield is used to betting on himself and coming out on top. With the 2021 NFL season underway, he has another opportunity to prove everyone wrong amid stagnant contract talks.

Both the Browns and Mayfield want to remain together for years to come. Mayfield is enjoying Cleveland and the organization believes it might have its franchise quarterback. But after years of historic disappointment, the Browns want to become perennial Super Bowl contenders and that requires having the right quarterback under center.

Mayfield made it clear this summer he is in no rush to sign a long-term deal and the feeling is mutual. The Browns loved what they saw from the former No. 1 overall pick late last season, but they want to see even more from him in 2021. 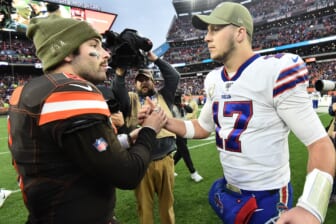 The Athletic’s Jeff Howe reported Thursday that the Browns are in a holding pattern with Mayfield on a contract extension. Most notably, the franchise hasn’t even extended an offer to the star quarterback and talks are quiet with the season underway.

Why the Cleveland Browns are holding off on contract extension

Cleveland has seen the good and bad moments from its 5-foot-1 quarterback. He showed great promise as a rookie, throwing 27 touchdowns and posting a 93.7 passer rating. But he regressed the following year, throwing nearly as many interceptions (21) as touchdowns (22) and completing just 59.4% of his pass attempts.

Bringing in Kevin Stefanski as head coach changed everything. In a new offense with an improved offensive line, Mayfield looked far more comfortable. In his final eight regular-season starts last season, Mayfield completed 63.8% of his passes with over 2,000 passing yards and a 15-1 TD-INT ratio.

The issue for Cleveland is the prices for top quarterbacks are rising. Entering the seasons, three quarterbacks were playing on contracts worth more than $40 million per season. If Mayfield sustained the level of play that pushed his team deep into the playoffs last year, he could be the next in line.

But general manager Andrew Berry is also aware of the context. Mayfield still has some bad moments and his play is elevated because he plays in a quarterback-friendly scheme with a great offensive line.

There are zero reasons for either side to rush into negotiations. Mayfield is better off proving himself once again and waiting for Lamar Jackson to sign a new deal. If both happen, he can become one of the highest-paid quarterbacks in the NFL.

As for the Browns, they have Mayfield under contract for $18.858 million next season. Even if they don’t have a definitive answer by then or an extension isn’t signed, the exclusive franchise tag can be used in 2022 and 2023.