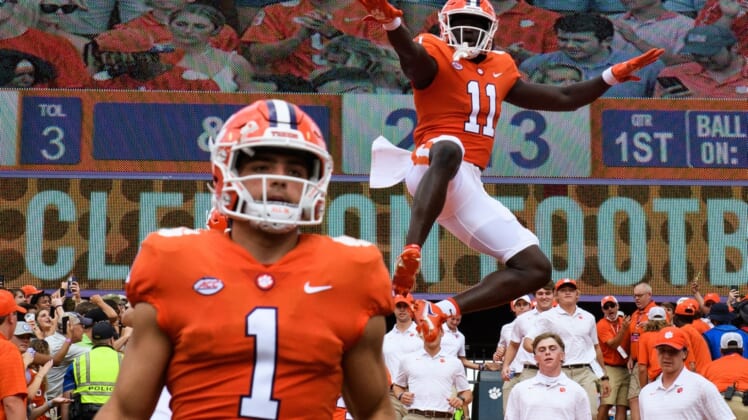 No. 6 Clemson weathers storm, late G-Tech rally for win
Will Shipley rushed for 89 yards and two touchdowns as No. 6 Clemson survived Georgia Tech as well as an extended lightning delay en route to a 14-8 victory Saturday at Clemson’s Memorial Stadium.

The Tigers have won seven consecutive games against the Yellow Jackets (1-2, 0-1 ACC), but got more than they bargained for after trouncing Georgia Tech 73-7 last season.

Georgia Tech outplayed Clemson for much of the game and outgained the Tigers 309-285, but Clemson’s defense came up big in crucial situations. Linebacker James Skalski thwarted a shovel pass from Georgia Tech quarterback Jordan Yates to Dylan Deveney on fourth-and-goal from the Clemson 2-yard line with 15 seconds remaining as the Tigers survived in the ACC opener for both teams.

The Tigers’ defense has not allowed a touchdown through three games this season, marking the first time they’ve done that to open a season since 1950.

Shipley, a freshman running back, scored on a pair of three-yard runs — one in the first quarter, the second in the fourth — as the Tigers stuck to a conservative running game. Shipley, the ACC’s Rookie of the Week last week, has rushed for 169 yards and four touchdowns in Clemson’s last two games.

Quarterback D.J. Uiagalelei was largely ineffective in the passing game, completing 18-of-25 passes for 126 yards.

Georgia Tech’s Yates completed 20-of-33 passes for 203 yards, including four for 82 yards to Kyric McGowan.

The game was delayed for one hour and 52 minutes by a nearby lightning strike with 32 seconds remaining in the first half and Clemson leading 7-0. When the teams finally resumed play, Tech’s Brent Cimaglia kicked a 22-yard field goal to make it 7-3 at the half.

Clemson drove 66 yards in 11 plays to pull ahead 14-3 on Shipley’s second touchdown with 8:12 remaining, but the Yellow Jackets wouldn’t go away, cutting the Tigers’ lead to 14-6 on another 22-yard field goal by Cimaglia with 1:19 left, then recovering an onside kick and marching to the Clemson 2-yard line in the waning seconds before coming up short.