Ross is currently scheduled to have surgery on Thursday but Tigers coach Dabo Swinney said the procedure might be postponed if Ross feels good Wednesday.

If the surgery is pushed back, Ross would attempt to play in Clemson’s regular-season finale against South Carolina on Nov. 27.

Swinney said Ross has dealt with the injury for the entire season. 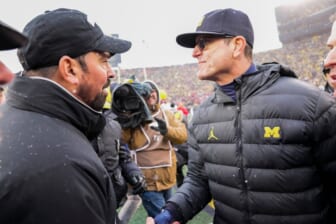 “Justyn has played with a very, very small stress fracture, you know, all year long in his foot and hasn’t missed a beat,” Swinney told reporters. “He really has done well. He kind of rolled his ankle and his other foot last week and that was kind of, you know, we had to kind of get him ready for this week, but he just planted it wrong.

“So it’s something that he’s been battling and all year long. I mean, since Day 1, before (the opener against) Georgia.”

Ross leads Clemson with 46 receptions for 514 yards and three touchdowns. He missed the entire 2020 season after spinal fusion surgery.

Ross is expected to enter the NFL draft following the season.