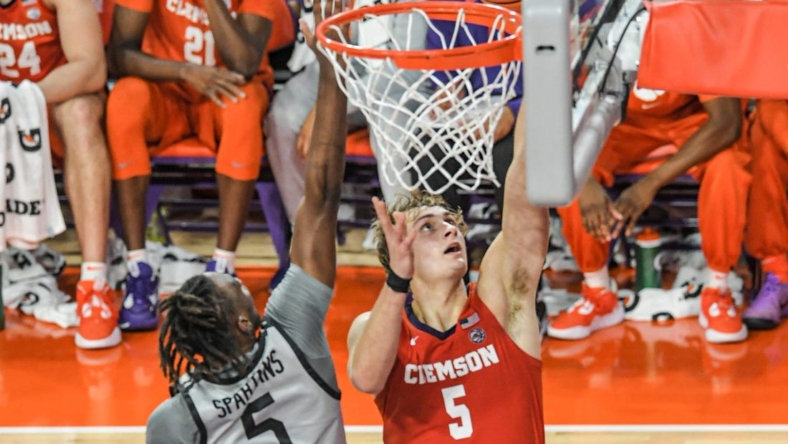 Brad Brownell’s Tigers will host Bellarmine on Friday as Clemson looks to win back-to-back games for the first time this season.

The Tigers (2-1) come in having disposed of USC Upstate 81-70 at home on Monday night, with point guard Chase Hunter leading the way with 20 points. Clemson had four players score in double figures.

“Chase was outstanding,” Brownell said after the win. “Tonight was incredible. Asking a guy to handle it as he did and still get other guys involved, he was still 4-for-6 from three, and he still had three assists, in 35 minutes. I wish that was about 30-31 (minutes), but he’s played well. We need to keep him out there.”

Alex Hemenway was also hitting from the perimeter, scoring 18 points, while also hitting on 4-for-6 from beyond the arc, and Brownell is looking for his shooter to be a little more aggressive early in the season.

“He’s got to be a little more aggressive when he can,” Brownell said. “Sometimes you just got to find an open court situation when you’re a shooter. But certainly, it was good to see him knock in a couple today and kind of get him going.”

Bellarmine, out of the Atlantic Sun Conference, comes in at 2-1 on the young season, which includes a 67-66 win over fellow ACC member Louisville in the season opener.

The Knights are fresh off an 86-46 romp over Division II Campbellsville-Harrodsburg, giving head coach Scott Davenport the 400th win of his career.

“I had no idea until I was asked about it. No clue,” Davenport said of the milestone. “It is the definition of a program. The paychecks are not about what goes in the bank, they’re emotional paychecks. The student body, the community… it was incredible.”

Slowing Peter Suder will be key for Clemson, as the freshman guard comes in averaging 15.3 points per game, while shooting 36.4 percent from 3-point land.

As a team, Bellarmine comes in shooting 32.8 percent from 3-point land this season and perimeter defense is something Brownell will emphasize after USC Upstate hit on 40 percent of their attempts from beyond the arc.

“Late in the game when we got the lead a little bit I just I think our guys just kind of gave in a little and we didn’t sustain our defensive intensity and effort a little bit,” Brownell said. “Let them score a couple. And they made a couple of tough shots but that frustrated me a little bit.”