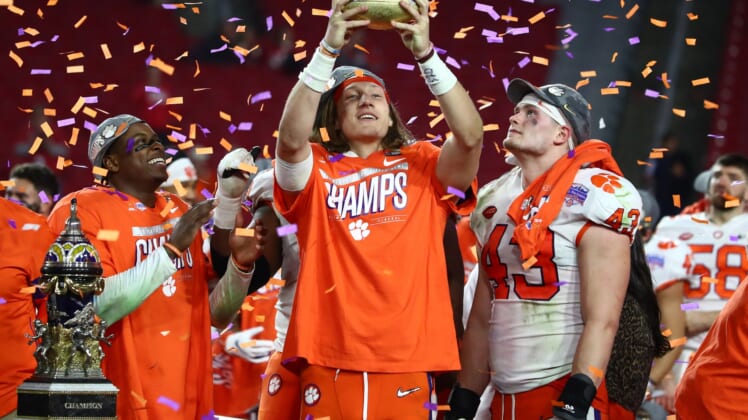 Both Clemson and Ohio State earned trips to the College Football Playoff last season. Clemson fell to LSU in the title game by the score of 42-25. That came after they defeated the Buckeyes in the semifinal round.

Should the 2020 season go on as planned, it would not be a surprise if these two met for the championship come next January. They are the two favorites to earn bids to football’s version of the Final 4.

It’s no surprise that Clemson and Ohio State sit at the top. The Tigers return star quarterback and Heisman favorite Trevor Lawrence at quarterback. Travis Etienne’s decision to remain in college after the running back dominated last season plays a role in where they stand, too.

As for the Buckeyes, they are relying on all-everything quarterback Justin Fields to be among the top players at his position in college football. Despite losing running back J.K. Dobbins to the NFL, Ohio State also landed Oklahoma grad transfer Trey Sermon to fill the void.

As for the other two programs within the top four, Alabama and Oklahoma have question marks at quarterback after Tua Tagovailoa and Jalen Hurts left for the NFL.

Both have in-house candidates to do damage this coming season. Mac Jones played well in Tua’s stead for Bama last season. As for Oklahoma, No. 1 quarterback recruit Spencer Rattler could earn the starting job as a freshman.

Notre Dame is also an interesting team to consider when looking at odds. Ian Book returns for another season under center. The team also has a ton of young skill-position talent under Brian Kelly after he helped the Irish post a combined 33-6 record over the past three seasons.

As it is, the 2020 college football campaign is going to be more wide open than ever before. It should be a ride.