Clemson looks to peak late, starts with battle vs. Louisville 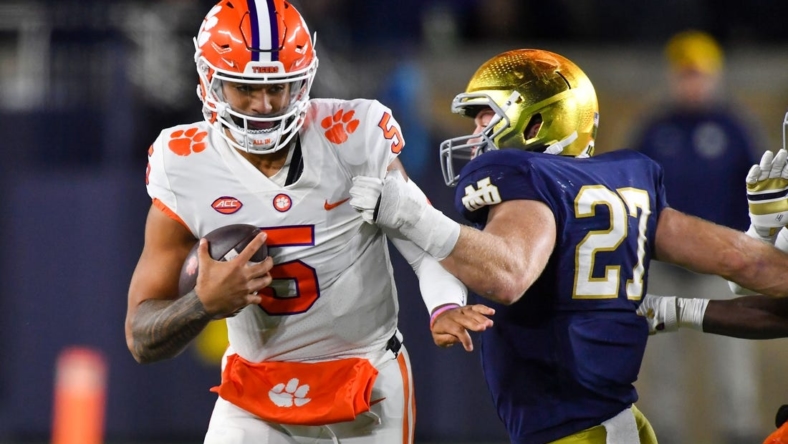 No. 10 Clemson is looking to make a late-season push to climb back into the playoff picture, and it will look to begin that rally Saturday afternoon when it hosts Louisville in an Atlantic Coast Conference matchup.

The Tigers (8-1, 6-0 ACC) saw their title hopes take a potentially-crushing hit last week following a 35-14 loss at nonconference rival Notre Dame. Although Clemson remains atop the ACC’s Atlantic Division, on Tuesday night it found out it dropped six spots in the latest College Football Playoff rankings.

The Tigers have made the CFP in six of the past eight seasons. They have a 38-game home winning streak and have never lost to Louisville in seven previous meetings.

But the Tigers lost to a three-loss Fighting Irish team and have no games left against ranked opponents to help bolster their playoff resume.

The alarming part for Swinney was the way Clemson was dominated by Notre Dame in its worst loss to an unranked opponent in 11 years.

“Physically (we) got our butt kicked. Real simple,” Swinney said. “We did a lot of technical things wrong, too. Momentum, turnovers, blocked punt. It’s hard to turn that on the road. Good news is we know we’re better than that.”

Louisville (6-3, 3-3) is on a four-game winning streak that includes wins over a ranked Wake Forest team and a James Madison team that was ranked earlier this season.

The Cardinals are playing some of their best football of the season and showed it in the 34-10 victory over the Dukes. Quarterback Malik Cunningham was sharp, completing 14 of 20 passes for 223 yards and three touchdowns.

“I think once you get after the first part of the season, you kind of get a good identity of your team,” Louisville coach Scott Satterfield said. “You kind of know where your strengths and weaknesses are after the first four or five games. We were inconsistent early on playing, and I think over the last four games, we’ve really found some consistency.”

The Cardinals amassed 244 yards on the ground against the top-ranked rushing defense in the FBS in terms of yards per carry (2.47) led by Tiyon Evans (10 carries, 126 yards, TD) and Jawhar Jordan (17 carries, 117 yards).

Clemson is ranked 20th in the nation in rushing yards allowed per carry and allows 6.32 passing yards per attempt.

“You look at their team defensively, they’re still outstanding on the strength of their team up front on the defensive line, two deep,” Satterfield said. “They’re all really good players, high draft pick players.”