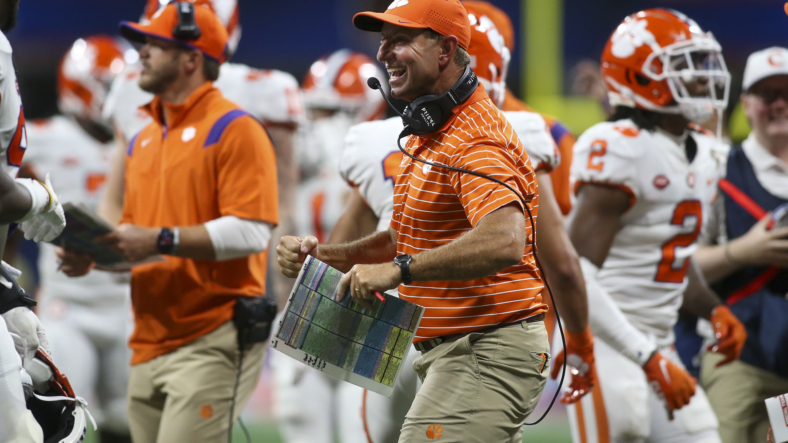 Dabo Swinney has been the head coach of the Clemson Tigers since 2009. He’s led his team to 11 consecutive double-digit victory seasons, including two FBS National Championships, like when the Tigers went 15-0 in 2018. Turning the Tigers into a perennial contender, Swinney has shown he’s one of the best program leaders in college football.

Now, after 13 successful seasons, the university has decided to lock Swinney in for another decade. According to Brett McMurphy, Swinney has signed a 10-year, $115 million contract extension with Clemson. This new deal keeps him in town through the 2031 college football season.

Clemson is the only school Swinney has ever been a head coach at. After compiling a 151-36 record, it’s clear the Tigers don’t want the 52-year-old Swinney walking away any time soon. Swinney is also 11-7 all-time in bowl games.

Not only does Swinney’s contract provide job security for another decade, it also makes him the second-highest paid coach in college football. Alabama’s Nick Saban only recently agreed to an eight-year, $93.6 million extension, earning him an average of $11.7 million per season. Swinney’s contract comes in just behind the widely-respected Crimson Tide coach, at an average value of $11.5 million per season.

Like Saban, Swinney has proven to be among the best coaches in the nation, winning the Paul “Bear” Bryant Award for the nation’s top college head coach on three separate occasions in 2015, 2016, and 2018.

The Tigers started off their 2022 season on the right foot once again by taking Georgia Tech down in a 41-10 blowout on Monday. Clemson continues play in Week 2 when Furman visits Frank Howard Field at Clemson Memorial Stadium on Saturday.