Clemente Award winners to wear No. 21 on caps 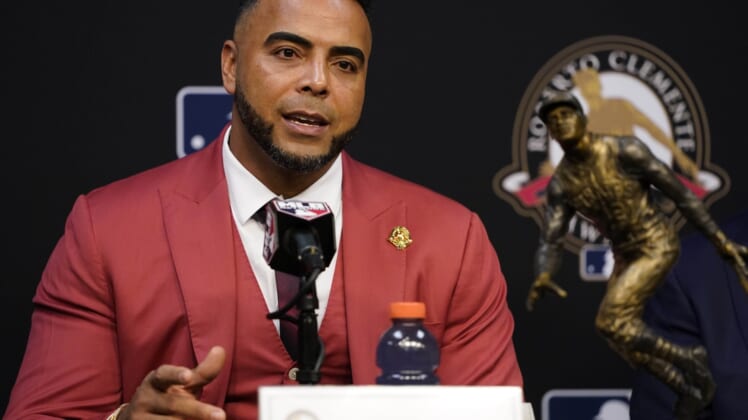 The eight active winners of the Roberto Clemente Award will wear the No. 21 of the late Pittsburgh Pirates great on the back of their caps for the remainder of their careers, Major League Baseball announced Thursday.

Their caps will bear Clemente’s number beginning with Opening Day.

MLB is marking the 50th anniversary of the death of Clemente, who died Dec. 31, 1972, in a plane crash as he was making his way to Nicaragua to deliver aid to earthquake victims. He was 38.

The Roberto Clemente Award is given annually to the player who best represents the game “through extraordinary character, community involvement, philanthropy and positive contributions, both on and off the field.”

“The Roberto Clemente Award is easily the best award I’ve won in my career,” said Rizzo, the 2017 winner. “He served everyone else. … I’ll be happy that I get to wear that number 21.”

In the NFL, winners of the prestigious Walter Payton Award wear a special patch on their jerseys throughout their careers.

Clemente was the 1966 National League Most Valuable Player, a two-time World Series champion and 15-time All-Star. His final hit of the 1972 season was the 3,000th of his career.

He was posthumously enshrined in the National Baseball Hall of Fame in Cooperstown, N.Y., in 1973 by special election.