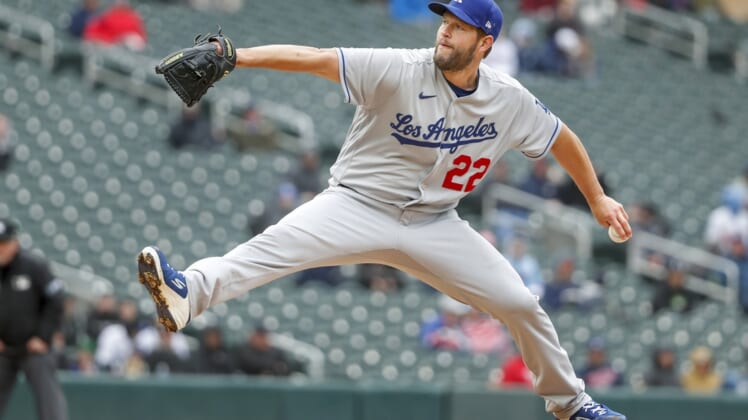 Pitching on a 38-degree day with a wind-chill of 28 degrees, Clayton Kershaw struck out 13 batters in seven perfect innings before being pulled Wednesday afternoon and the Los Angeles Dodgers bats came alive in beating the Minnesota Twins 7-0 in Minneapolis.

Cody Bellinger, Gavin Lux and Austin Barnes homered on consecutive at-bats in the eighth inning for the Dodgers, who had hit just one homer in their first four games of the season. Max Muncy also homered Wednesday for Los Angeles.

Kershaw (1-0) was on a 75-pitch limit in making his first start following a 10-8 season when he made just 22 starts and missed the postseason due to left forearm and elbow injuries. He threw 80 pitches, 53 for strikes.

The three-time Cy Young Award winner struck out the side in both the fourth and sixth innings, using the first 11 of his strikeouts came with his slider. Kershaw has one no-hitter hitter in his career, on June 18, 2014, when he struck out 15 Colorado Rockies in an 8-0 win.

Alex Vesia replaced Kershaw in the eighth and Gary Sanchez (who had struck out against Kershaw on his first two plate appearances) broke up the perfect game one out later with a line single to right. Max Kepler followed with a walk, the only other Twin to reach base.

Mookie Betts went 2-for-5 with a double and two runs scored, Justin Turner drove in two runs and Freddie Freeman doubled and had two hits for the Dodgers who finished with 11 hits.

Chris Paddack (0-1), making his first start for Minnesota after being obtained in a trade with the San Diego Padres last week for All-Star reliever Taylor Rogers, took the loss allowing three runs on six hits over four innings. He struck out three.

The Dodgers jumped out to a 2-0 lead in the first inning loading the bases on a leadoff double by Betts, an infield single by Trea Turner and a hit batter by Max Muncy. Justin Turner then drove in Betts and Trea Turner with a single to right.

Los Angeles extended its lead to 3-0 in the second when Betts singled, advanced to third on a double off the third-base bag by Freeman and scored on a sacrifice fly by Trea Turner.

The Dodgers then broke the game open with one out in the eighth when Bellinger, Lux and Barnes homered back-to-back-to-back on four pitches off reliever Dereck Rodriguez. Muncy added another solo shot leading off the ninth off Griffin Jax.