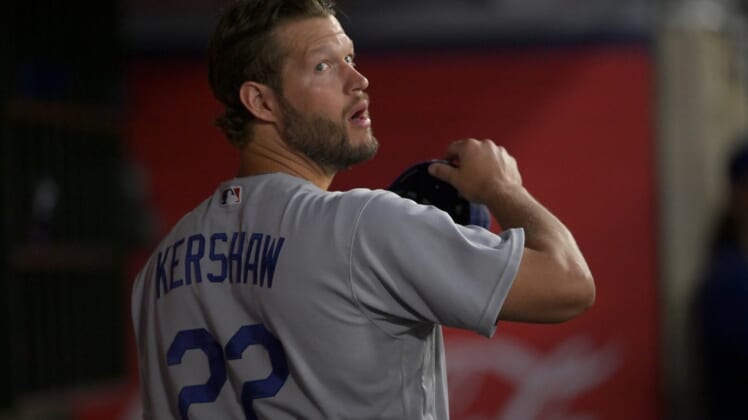 Clayton Kershaw carried a perfect game into the eighth inning to lead the Los Angeles Dodgers to a 9-1 victory over the Los Angeles Angels on Friday night in Anaheim, Calif.

Kershaw (7-2), who threw his only career no-hitter in 2014, retired the first 21 batters before Angels cleanup hitter Luis Rengifo hit a slider on a 2-1 count into the left-field corner for a double, ending Kershaw’s bid to throw the 24th perfect game in major league history.

Kershaw was also perfect through seven innings against the Minnesota Twins on April 13, but Dodgers manager Dave Roberts removed Kershaw after 80 pitches that night, and the bullpen quickly squandered the perfecto.

In this one, Kershaw’s night was finished after making 89 pitches in eight scoreless frames. He did not walk a batter and struck out six.

One of those strikeouts — Jonathan Villar to lead off the sixth inning — resulted in the ejection of Villar for arguing a called third strike.

The Angels’ lone run of the game came on a ninth-inning home run by Brandon Marsh against Dodgers reliever Reyes Moronta.

Earlier in the night, the Dodgers defense made some nice plays to keep Kershaw’s perfect game bid alive. In the fourth inning, Michael Stefanic hit a sharp grounder to the right of third baseman Justin Turner. But Turner backhanded the ball and threw out Stefanic with first baseman Freddie Freeman digging the ball out of the dirt.

In the fifth, second baseman Hanser Alberto made a lunging catch to rob Jared Walsh. Then in the seventh, Stefanic hit a smash to the left of shortstop Trea Turner, who snared the ball and made the throw to first.

Kershaw had plenty to work with, as the Dodgers offense finished with 12 hits, including big nights from Will Smith (4-for-4 with three runs) and Justin Turner (3-for-5 with four RBIs).

Seven of the Dodgers’ 12 hits came against Angels starter Patrick Sandoval (3-5), who gave up four runs (two earned) in 4 2/3 innings.

After scoring two early runs, the Dodgers doubled their lead in the fifth, when Alberto drove in two runs with a triple. The Dodgers put the game away with four runs in the sixth, capped by a two-run single by Justin Turner.