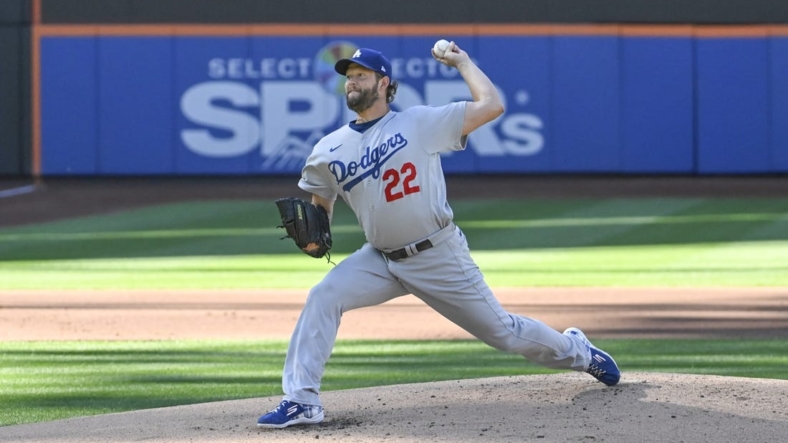 Clayton Kershaw is aiming to be in top form for the postseason after his latest round of back issues.

The left-hander makes his second start since returning from the injured list when the Los Angeles Dodgers host the San Francisco Giants on Wednesday afternoon in the finale of a three-game series.

Kershaw, 34, went four weeks between starts due to right SI joint inflammation in his lower back. He took the mound on Thursday and gave up one run and one hit in five innings during a no-decision against the New York Mets.

The best news for the Dodgers (93-42) wasn’t Kershaw’s solid outing, but the fact the nine-time All-Star didn’t have any issues with his back during the 74-pitch effort.

“I feel great right now. Really, it took me about a week to feel good after that last one,” Kershaw said of an Aug. 4 start against the Giants. “It’s not an easy thing to deal with all the time, but for right now, I feel great and don’t expect that to change.”

The 2022 performance against the Giants is different from most of Kershaw’s career. The three-time National League Cy Young Award winner and 2014 NL Most Valuable Player is 24-15 with a 1.99 ERA in 55 appearances (53 starts) against San Francisco.

The teams split the first two games of the series. San Francisco belted five homers for a 7-4 win on Monday, and all the runs for both teams came on long balls on Tuesday when Los Angeles notched a 6-3 triumph.

Max Muncy went 3-for-3 with two homers and three RBIs and Joey Gallo smacked a three-run shot for the Dodgers on Tuesday.

Muncy has four homers against the Giants this season and 20 vs. San Francisco in his career.

“Things kind of clicked for me,” Muncy said. “The biggest thing to me was the flight path. The home runs are amazing, but the more important part was the direction the ball was coming out.”

San Francisco manager Gabe Kapler went with a bullpen game on Tuesday, and he set it up so left-hander Jarlin Garcia would face left-handed-hitting Muncy and Gallo in the second inning. Muncy led off the frame with a double, Justin Turner walked, and Gallo blasted a homer to give Los Angeles a 3-1 lead.

An inning later, Muncy hit a two-run shot off Garcia, who allowed five runs in 1 2/3 innings.

“There have been moments when he’s come in the game with a real intent and throwing a ton of strikes and other times he’s fallen behind,” Kapler said of Garcia. “And when he falls behind, he’s just not an effective major league reliever. When he gets ahead and is very aggressive and assertive with his fastball early in counts and gets ahead, he’s one of the better left-handed relievers around the game.”

The Giants (65-69) had a four-game winning streak snapped. San Francisco also has lost nine of its past 10 games against the Dodgers.

Right-hander Alex Cobb (5-6, 3.58 ERA) will start the Wednesday contest for the Giants.

Cobb has allowed seven hits over 12 scoreless innings in his past two starts. The most recent outing resulted in a victory as he allowed just three hits in seven innings against the Philadelphia Phillies on Friday.

Cobb, 34, is 0-1 with a 5.25 ERA in two starts against Los Angeles this season. Those are his only two career outings against the Dodgers.