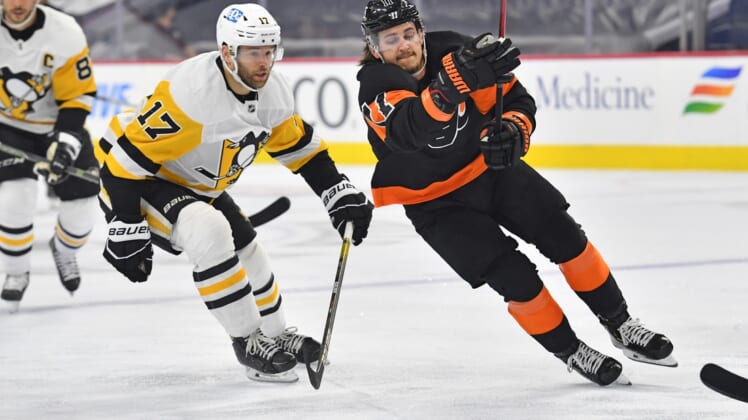 Claude Giroux had two goals and an assist Monday as the Philadelphia Flyers upset the visiting Pittsburgh Penguins 7-2.

Joel Farabee had a goal and two assists, Shayne Gostisbehere had a goal and an assist, and Jakub Voracek added three assists for the Flyers, who had lost three straight and four of five.

Sidney Crosby and Jason Zucker scored for the Penguins, who entered the game in first in the East.

Penguins goaltender Casey DeSmith stopped 33 of 37 shots through two periods. He was replaced by Tristan Jarry, who stopped five shots.

It appeared that DeSmith made a flashy glove save on Hayes in the first and play continued. At the next stoppage, a review showed that DeSmith’s glove was over the goal line. Hayes was awarded a goal at 5:58.

Gostisbehere gave the Flyers a 2-0 lead with a power-play goal on a shot through traffic from the center point at 14:08 of the first.

A slick play by Konecny gave Philadelphia a 3-0 lead 1:04 later. From the end boards, he tipped the puck backward off the side of the net and out to the slot, where Giroux one-timed it over DeSmith’s left pad.

Allison got the only goal of the second, at 7:50, off a three-on-two and setup from Scott Laughton.

On a power play, Crosby cut it to 4-1 at 2:30 of the third. On a sharp-angle one-timer off a pass from Kris Letang, Crosby chipped the puck past Lyon.

During another power play, Zucker further cut it to 4-2 at 8:24 of the third. From the front of the net, he redirected a pass from John Marino at the right point.

Philadelphia regained a three-goal edge, 5-2, at 11:37 of the third when Farabee moved in from the right-wing boards and batted the puck in far side.