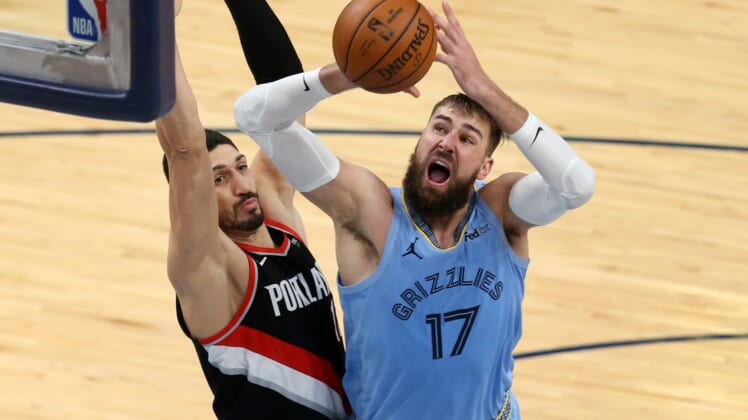 CJ McCollum recorded 26 points and six assists to help the Portland Trail Blazers roll to a 130-109 victory over the host Memphis Grizzlies on Wednesday night.

Norman Powell added 24 points and Damian Lillard scored 23 as the Trail Blazers (34-28) defeated Memphis for the first time in three meetings this season. The Grizzlies won in Portland last Friday and Sunday.

The Trail Blazers have won each of the first two contests of a six-game road trip by 21 points. Portland routed the Indiana Pacers 133-112 on Tuesday.

Carmelo Anthony scored 18 points and Jusuf Nurkic added 15 points and nine rebounds for the Trail Blazers, who shot 48.9 percent from the field, including 15 of 40 (37.5 percent) from 3-point range.

Seventh-place Portland moved within a half-game of the Dallas Mavericks for a top-six spot in the Western Conference. The top six teams avoid the play-in round.

Lillard came out hot with 14 first-quarter points as Portland opened up a 38-23 lead.

Just 48 seconds later, McCollum drained a 3-pointer to make it 71-38, and the 33-point margin stood up as Portland’s largest lead of the game. The Trail Blazers held a 74-46 halftime advantage.

Powell and Enes Kanter scored baskets and Anthony drained a 3-pointer as Portland scored the first seven points of the fourth quarter to increase the margin to 26 and continue on to the easy win.