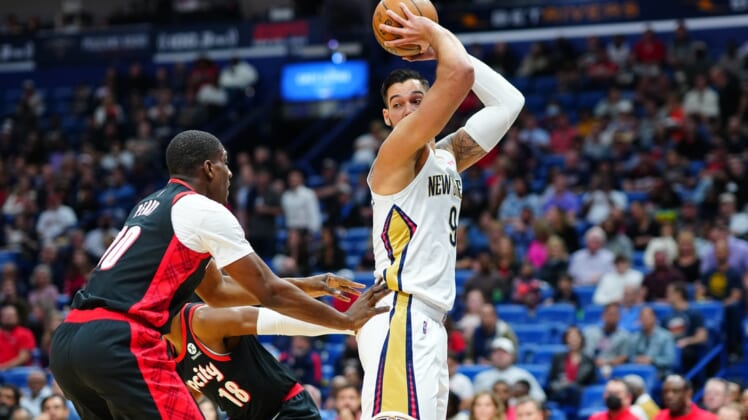 Willy Hernangomez had 17 points and 14 rebounds for New Orleans, and Jonas Valanciunas, returning from a one-game absence caused by a sore ankle, added 14 points.

Trey Murphy III and Larry Nance Jr., who was acquired along with McCollum from Portland in a February trade, had 12 each, and Jaxson Hayes scored 11 as the Pelicans overcame the absence of leading scorer Brandon Ingram (hamstring tightness).

Up by 13 at halftime, the Pelicans began their third-quarter scoring with a three-point play by Hayes and a four-point play by Devonte’ Graham that gave them a 72-54 lead.

The Pelicans led by as many as 26 points before holding a 101-76 edge at the end of the third quarter.

In the first quarter, the lead changed hands nine times and the score was tied four times before the Pelicans finished the period with a push.

McCollum and Murphy each made a 3-pointer as New Orleans took a 33-28 lead after 12 minutes.

The Pelicans scored the first seven points of the second quarter, but the Blazers scored the next five to trim the gap to 40-33.

Portland got within seven points once more before New Orleans scored seven straight for a 49-35 lead.

Jones’ layup gave the Pelicans their biggest lead of the half at 15 points before they took a 65-52 lead into halftime.