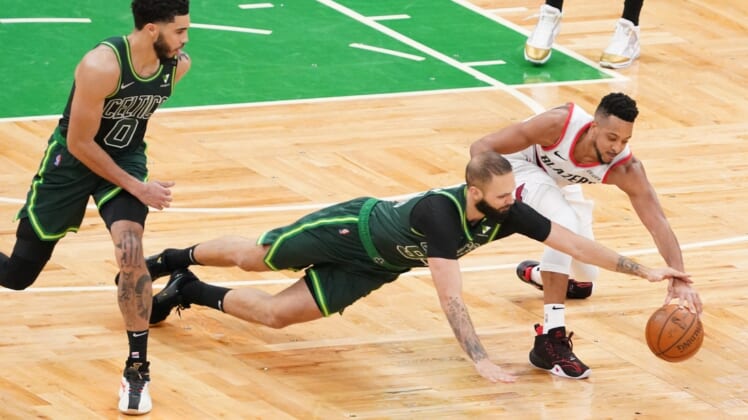 CJ McCollum scored a game-high 33 points, Damian Lillard added 26 points with 13 assists, and the Portland Trail Blazers won their fourth straight game on their current road swing with a 129-119 defeat of the Boston Celtics on Sunday in Boston.

Portland (36-28) remained perfect on its six-game road trip thanks to a balanced scoring effort with all five starters scoring in double figures. Three hit for at least 23 points with Norman Powell scoring 23, including a jumper in the final minute that gave Portland a seven-point lead.

Powell’s basket followed a Carmelo Anthony 3-pointer that ended a field-goal drought of 2:43. Anthony finished with 13 points, and his 3-pointer was the last of Portland’s 19 on a 19-of-38 shooting night for the team.

The Trail Blazers’ second-half defensive effort on Jayson Tatum also proved crucial. Tatum — one game removed from tying a Celtics’ franchise record with 60 points — scored 24 points in a raucous first half with the teams combining for 142 points.

Portland held Tatum to just two points in the third quarter and nine in the second half. He finished with 33 points on 11-of-19 shooting before leaving in the final minute after colliding with teammate Jaylen Brown.

Brown also left the game and coach Brad Stevens didn’t immediately have an update on either player after the game.

Jusuf Nurkic recorded his fifth double-double in the last six games, posting 14 points and 11 rebounds, but no other Trail Blazer grabbed any more than Lillard’s six boards.

Boston parlayed its rebounding advantage into a 10-0 edge in second-chance points. The Celtics also out-shot Portland from behind the 3-point line, going 20-of-39 as a team.

Brown recorded a double-double for Boston with 16 points and 11 rebounds,, and Evan Fournier finished with 21 points.

Marcus Smart finished with 11 points, eight rebounds and eight assists, but was ejected with less than two minutes remaining when he was assessed a technical after making low contact with Nurkic on a screen.