Cincinnati Reds use 7-spot in 3rd to blast Cleveland Indians 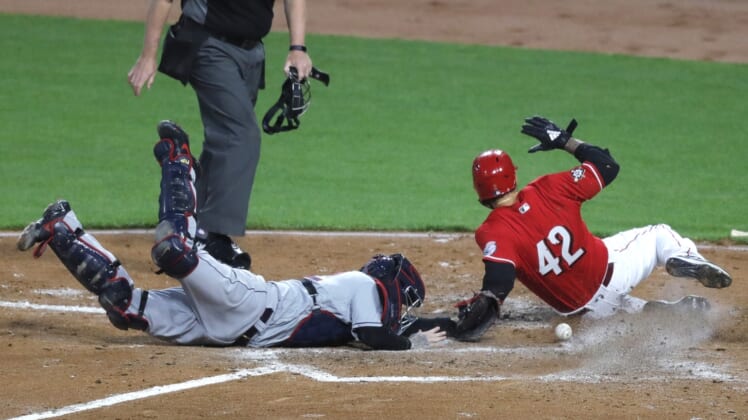 Joey Votto’s two-run homer highlighted a seven-run third inning, and the Cincinnati Reds won their sixth straight at home, 10-3 over the Cleveland Indians on Friday night.

Nick Castellanos also homered for one of his two hits and had two RBIs, along with Eugenio Suarez and Tyler Stephenson for the Reds, who’ve averaged 9.6 runs and scored 10 or more four times while starting 6-1 at home. Cincinnati had just returned from a 2-4 road trip.

Jordan Luplow homered in the ninth and Josh Naylor recorded three hits for the Indians, who lost for just the third time in the last nine games versus Cincinnati.

Rosario’s homer to left-center field gave Cleveland a 1-0 lead, but it stranded 10 runners on the night, including the bases loaded in the top of the third.

That proved to be a pivotal missed opportunity as Cincinnati broke the game open in the bottom of the frame. Following a fielding error on third baseman Jose Ramirez (one RBI), a hit batter and wild pitch, Hoffman tied the game with a bloop single. Jesse Winker then gave the Reds the lead with an RBI single and Castellanos also singled home a run to make it 3-1 and chase Indians starter Logan Allen, who was charged with five runs — four earned — and three hits over two innings.

It only got worse for Cleveland as Suarez delivered a two-run double down the left-field line off Phil Maton and Votto followed with his two-run shot to make it 7-1 — all before the Indians recorded an out in the inning.

Stephenson’s two-run single came with two outs in the fifth. Castellanos clubbed his fifth homer of the season to right-center field an inning later.

Reds infielder Mike Moustakas was scratched from Friday’s starting lineup due to a non-COVID-19-related illness.