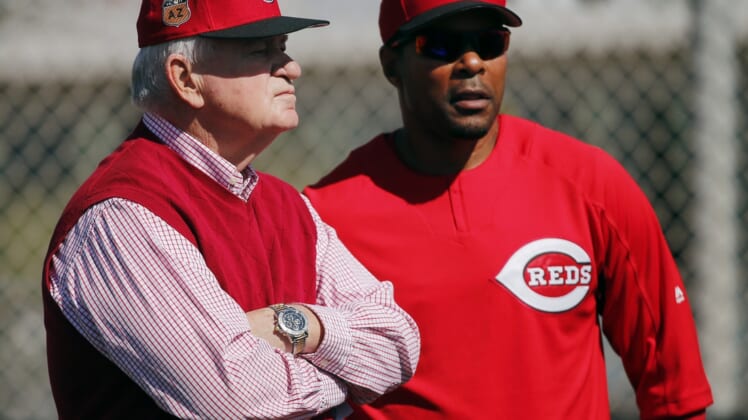 Hall of Fame shortstop Barry Larkin is joining the Cincinnati Reds television broadcast booth, part of a retooled lineup in the wake of the departure of Thom Brennaman.

Larkin, who played for the Reds from 1986-2004, will be the color analyst for all 81 home games, according to the Cincinnati Enquirer. He will sit alongside John Sadak, who was hired to replace Brennaman.

Brennaman resigned in September from FOX Sports Ohio, a little more than one month after he used a homophobic slur on the air. He was suspended immediately after the incident. He spent 33 years calling play by play.

For the Reds, Larkin will be among a group of analysts that includes former MLB pitcher Jeff Brantley and Chris Welsh, who is entering his 29th season as the Reds TV analyst.

Larkin, 56, said he was looking forward to giving fans an inside look at the game.

“I know people want to know what’s happening on the field and, more importantly, why it’s happening,” he said, per the team’s website. “I look forward to being able to educate and inform. I had a chance to spend some time with John Sadak, and I’m excited about his professionalism and consistency.”

Larkin transitioned to broadcasting in 2009 when he went to work for MLB Network and then joined ESPN in 2011. He rejoined the Reds five years ago as a special assistant for player performance.

Sadak is a veteran play-by-play announcer who has worked for a variety of outlets including CBS Sports and Westwood One. He called minor-league games for more than a dozen years and served as a fill-in voice for the New York Mets.

“This is a ‘pinch me’ moment that I don’t think you can top,” Sadak said of working with Larkin. “It was hard to top the idea of calling major league games. Then you add in a living legend, and you can pick his brain. You can watch the game alongside him. You can learn through him. It’s just incredible. He will instantly become the most decorated and accomplished person that I’ve had a chance to work with on a regular basis.”

Larkin was the National League Most Valuable Player in 1995. A career .295 hitter, he was a 12-time All-Star and was elected to the Hall of Fame in 2012 in his third year of eligibility.