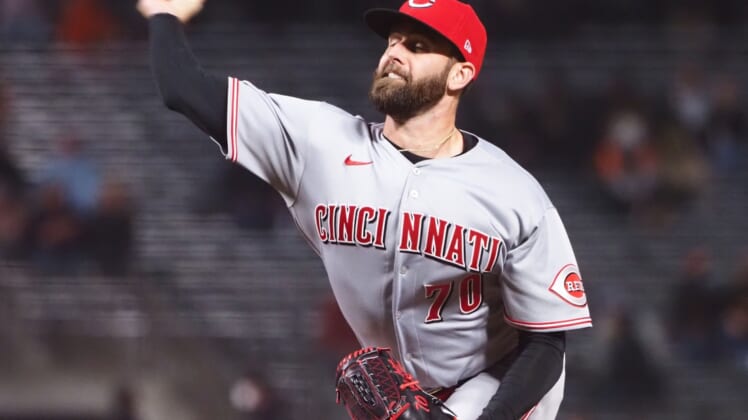 Jesse Winker and Joey Votto hit their first home runs of the season, while left-hander Wade Miley went five scoreless innings as the Cincinnati Reds returned to their winning ways with a 3-0 road victory Monday over the San Francisco Giants.

Cincinnati right-hander Tejay Antone added 3 2/3 innings of hitless relief and Lucas Sims got the last out for his first career save as the Reds ended a two-game losing skid that came after a six-game winning streak.

Right-hander Aaron Sanchez went five strong innings for the Giants, whose offense was held to just two hits. The Giants lost at home for the first time in four games this season and saw their four-game winning streak overall come to an end.

In a meeting of teams that opened the season 6-3, the Reds struck first in the opener of a three-game series.

Winker put the Reds on the scoreboard in the third inning when he lifted a two-out pitch from Sanchez over the wall in center field for a 2-0 lead.

Miley (2-0) gave up just two hits with a walk and three strikeouts after going six innings without giving up a run in his season debut against the Pittsburgh Pirates last week.

Votto’s home run in the sixth cleared the right field wall and landed in San Francisco Bay to give the Reds a 3-0 lead. It was the first ever “splash hit” at San Francisco’s bay-side park by a Reds player. It also was Votto’s 296th career home run and 970th career RBI.

Cincinnati had five hits Monday, one game after going hitless into the seventh inning by the Arizona Diamondbacks’ Luke Weaver. The Reds had just two hits in Sunday’s 7-0 defeat as they look to return to their early-season form when they were scoring 9.0 runs per game over the first eight contests.

Sanchez (0-1) gave up two runs on three hits over five innings with one walk and three strikeouts. The Giants continue to pitch well, giving up just nine total runs over their last five games.