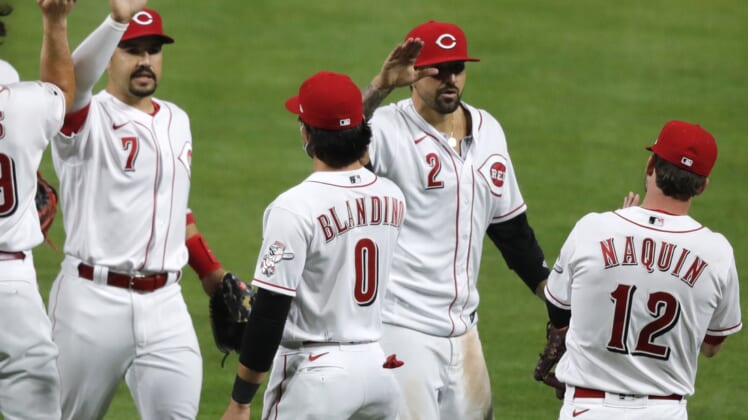 It’s been five seasons since the Cincinnati Reds won four of their first five games.

For the Pittsburgh Pirates, it’s slightly longer since they dropped four of five to open a season.

The Reds can record a fourth straight victory by handing the visiting Pirates their fourth consecutive defeat when the NL Central foes continue their series on Tuesday night.

Cincinnati opened the season with a disheartening 11-6 home loss to St. Louis, but owns a 26-10 run advantage while winning three straight since then. After Mike Moustakas clubbed a tying solo homer in the fifth inning Monday night against the Pirates, and Nick Castellanos broke that tie with his third homer to put the Reds up for good of a 5-3 victory, Cincinnati has a chance to start 4-1 for the first time since 2016.

The Reds will also try for a seventh consecutive home victory over the Pirates.

Paced by Castellanos (8-for-15, three homers, six RBIs), the Reds have a team OPS of .899, have blasted eight home runs and posted eight other extra-base hits out of the gate.

“Hitting is contagious, and we’ve got a good vibe right now,” Castellanos, who is appealing a two-game suspension for instigating a benches-clearing incident with the Cardinals on Saturday, told the Reds’ official website.

Moustakas is 4-for-12 on the young season, and 5-for-7 with a home run against scheduled Pittsburgh starter Trevor Cahill, who will be pitching for his ninth team since breaking into the majors in 2009. Last season, the right-hander made 11 appearances with San Francisco, six of them starts, going 1-2 with a 3.24 ERA.

Cahill, who will try to help the Pirates avoid going 1-4 for the first time since 2015, signed a one-year deal with Pittsburgh on March 12. He told the Pittsburgh Post-Gazette that he’s not worried about his rather short spring training, which featured just 3 2/3 innings

“I know my body and what it’s capable of,” the 33-year-old right-hander told the Gazette. “I think I’m in a good spot. I don’t know what their plan is as far as pitch count or whatever.

“I’ve always just gone out there and pitched until the manager has taken the ball out of my hands.”

In 15 career appearances – including two starts — against the Reds, Cahill is 0-2 with a 3.95 ERA. Castellanos, however, is hitless in four at-bats versus Cahill.

The Reds counter with Wade Miley, who takes the ball after dealing with a hamstring issue during spring training. The left-hander pitched in six games last season for Cincinnati, starting four and going 0-3 with a 5.65 ERA. Miley is 2-3 with a 3.98 ERA in 10 career starts against the Pirates, but last faced them in September 2018 with Milwaukee.

Gregory Polanco is the only Pirates player to have any sustained success against Miley, going 4-for-9. Polanco, however, is 1-for-14 with six strikeouts on the young season.

Teammate Colin Moran has homered in back-to-back games, while Phillip Evans, stepping in for injured Ke’Bryan Hayes (wrist), is 4-for-8 with a home run he hit on Monday night.