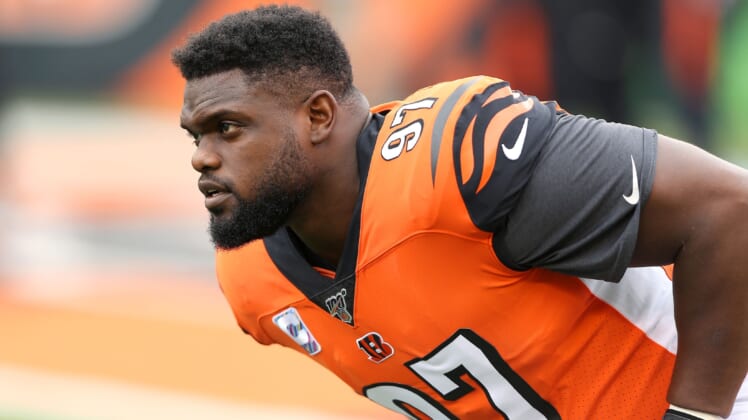 Geno Atkins’ days are numbered with the Cincinnati Bengals after 11 seasons, as head coach Zac Taylor announced the team’s plans to release him on Friday.

Atkins is a three-time, first-team All-Pro who earned eight Pro Bowl bids as one of his generation’s best interior pass-rushers with 75.5 sacks. However, Cincinnati saw the value in saving $9.5 million in cap space by parting ways with the 32-year-old, who can seek a fresh start with a legitimate contender.

Writing was on the wall after Geno Atkins’ diminished 2020 role

It’s no secret the Bengals are rebuilding, and they prioritized playing younger players last season to expedite their development over rolling out their best possible defense. They suffered the consequences en route to a 4-11-1 record.

This development led Atkins to get phased out of the starting rotation, and he appeared in only eight games, recording one tackle on 119 defensive snaps.

Cincinnati’s strategy made Atkins’ exit inevitable, and it triggered defensive end Carlos Dunlap to request an in-season trade to Seattle. Without Dunlap and Atkins playing at a high level and with prized free-agent tackle D.J. Reader missing most of the 2020 campaign, the Bengals were a disaster defensively.

Even with Atkins playing at the elite level he’s capable of, Cincinnati would still be on trouble. Now that he’s gone and there’s no hope for a resurgence with the team in 2021, there’s still holes galore on the Bengals’ roster.

Although they replaced Carl Lawson with Trey Hendrickson on the edge, their depth up front on defense leaves much to be desired. Provided Reader comes back as a much-needed gap-clogging force to play the run, any help Cincinnati can get to rush the opposing passer will be a welcome addition.

Atkins’ unique skill set isn’t easily replaced, so it’ll be interesting to see whether defensive coordinator Lou Anarumo counts on some combination of Larry Ogunjobi, Christian Covington or some other acquisition through free agency or the draft to bolster the interior.

Nothing against incumbent end Sam Hubbard either, but he’s much more effective as a run defender than a pass-rusher. Not having Atkins there to compensate for that looms as a serious problem as Anarumo devises his schemes for this coming season.

Not that this move to get rid of Atkins was a surprise, but there was enough cap space available if the Bengals wanted to keep him. Now that his release is official, it should at least somewhat alter the front office’s 2021 NFL Draft strategy.

Since Cincinnati has a prized No. 5 overall pick, let’s see what an updated three-round mock looks like from The Draft Network, with the team trading down to collect more assets and address the trenches on both sides of the ball:

This is a pretty phenomenal haul for the Bengals. Not only does Basham have 20 pounds on Hubbard and can also rush the passer better, but he offers versatility as an interior pocket pusher in obvious passing situations. Togiai is a thickly-built yet explosive complement to Reader on the inside and would compete for a starting spot right away.

As for the offense, Burrow gets a matchup nightmare of a playmaker in Pitts even after a trade down with the QB-needy Carolina Panthers. That deal also gives Cincinnati an additional third-round selection, which it uses on Ohio State’s Myers. He’s suited for a zone running scheme and is an excellent athlete, but falls to Round 3 because of inconsistent pass protection.

Read More: Cincinnati Bengals reportedly ‘locked in’ on target for No. 5 pick in 2021 NFL Draft