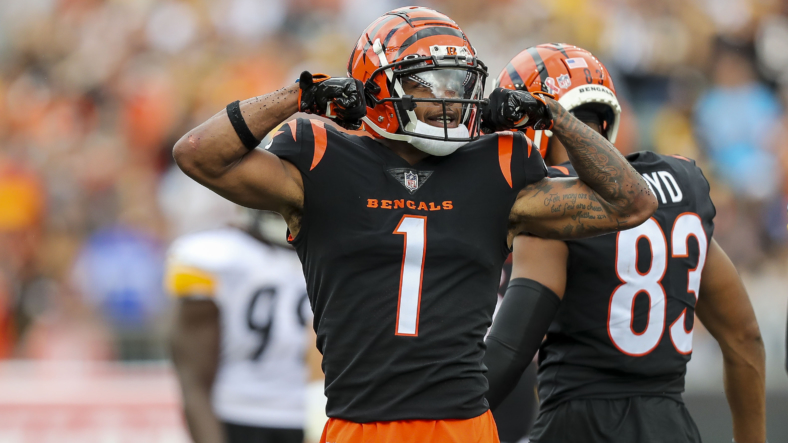 Cincinnati Bengals Pro Bowl wide receiver Ja’Marr Chase has reportedly been hit with a pair (pun intended) of fines for unsportsmanlike conduct during the team’s Week 1 loss to division rivals the Pittsburgh Steelers.

Week 1 of the 2022 NFL season was not what the Bengals were hoping for. Despite being a favorite at home against the Steelers and new starting quarterback Mitchell Trubisky, the team’s offense made quite a few key mistakes that opened the door wide open to a surprise 23-20 overtime defeat.

The disappointing performance was led by franchise quarterback Joe Burrow — and his four interceptions — and the offensive line which gave up seven sacks. One player that did have a positive showing was budding superstar Ja’Marr chase. As he racked up 129 yards through the air and pulled in one of Burrow’s two touchdown passes. However, despite the many high points, the wide receiver was involved with several low points that afternoon.

At many points during the day, Chase went head-to-head with two-time All-Pro safety Minkah Fitzpatrick. And following one of those battles the 22-year-old was photographed saluting his opponent with double middle fingers. After the game, Chase called the picture (which can be found below) “cool” and claimed it wasn’t the first time he has done that to the Steelers, “just the first time they caught me.” Well, it seems that being caught has likely led to Chase’s bank account being a little lighter on Sunday.

On Saturday, NFL Network insider Ian Rapoport reported that the young receiver was slapped with a pair of fines by the league. “Chase received two fines this past week, both for unsportsmanlike conduct. The first was for $13,261, the second listed was $10,609.”

Rapoport didn’t specifically confirm that the fines were due to Chase’s double birds, but one can only assume it was at least the source of one of them after an image of the moment went viral on social media this week.

Also Read:
How to Watch the Cincinnati Bengals Games Live This Season (2022)

The fine won’t hurt Chase’s pockets much after the young star signed a four-year extension in the offseason worth $30.8 million and included a $19 million signing bonus.