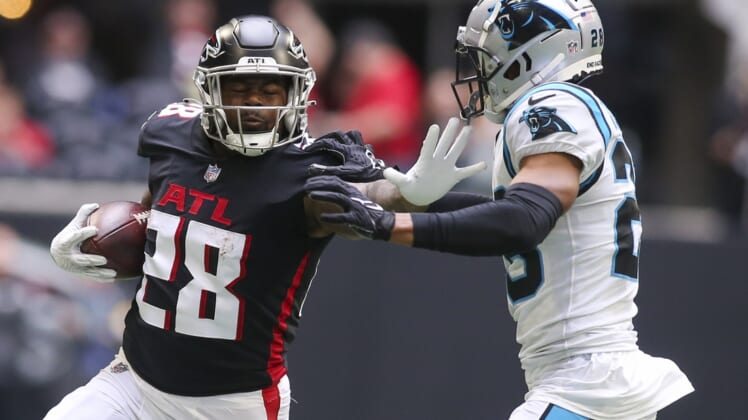 The Carolina Panthers finally scored another touchdown and they used four Zane Gonzalez field goals to post a 19-13 win over the host Atlanta Falcons on Sunday afternoon.

The Panthers (4-4) snapped a four-game losing streak despite losing quarterback Sam Darnold to an injury late in the game.

Darnold exited midway through the fourth quarter after landing hard on the field at the end of an 8-yard run that took the ball to the Atlanta 3-yard line. Darnold, who was placed in the concussion protocol, had scrambled for 11 yards on the previous play.

Three plays later, rookie Chuba Hubbard ran in from 6 yards out for Carolina’s first touchdown in a two-game span. That extended their lead to 19-10 with 6:31 remaining.

The Panthers racked up a season-high 203 rushing yards, including 82 on 24 carries by Hubbard.

Matt Ryan was 20-for-27 for 146 yards with a touchdown and two interceptions for Atlanta (3-4), which saw its two-game winning streak come to an end.

Falcons wide receiver Calvin Ridley, who was ruled inactive prior to the game, announced Sunday afternoon on Twitter that he needs to step away from football to focus on his mental health.

Atlanta had a chance to go back ahead, but Younghoe Koo was wide right on a 45-yard attempt in the opening minute of the fourth quarter. He was good on a 53-yarder in the final minute.

Gonzalez kicked field goals from 29, 51 and 57 yards in the first half.

The Falcons led 10-9 at halftime despite gaining only 111 yards of total offense.

The teams traded field goals in the first quarter. Koo made a 46-yard kick for the Falcons — following a Carolina fumble on the game’s first possession — and Gonzalez connected from 29 yards for the Panthers.

Ryan threw 15 yards to Cordarrelle Patterson early in the second quarter for the first touchdown of the game.