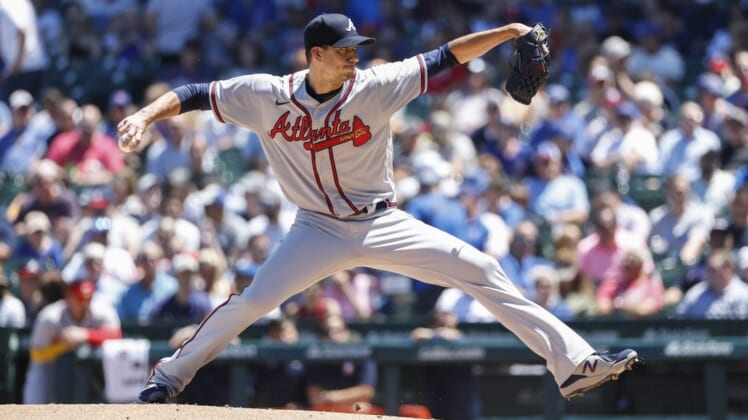 The Cubs scratched out the game’s only run against reliever A.J. Minter, who walked pinch-hitter Jonathan Villar to start the inning. Villar moved to second base on Andrelton Simmons’ sacrifice bunt and stole third after being unchecked by Minter.

Morel hit a fly to center fielder Michael Harris II, whose throw to the plate was wide toward the first base side and allowed Villar to slide home safely.

The winning pitcher was Chris Martin (1-0), who threw a scoreless eighth. David Robertson worked out of a bases-loaded jam in the ninth inning and earned his eighth save. Minter (2-1) allowed his first earned run since April 24.

Both starting pitchers worked quickly and efficiently on a day when the wind was blowing in at Wrigley Field.

Chicago’s Keegan Thompson pitched his best game of the season. He left after walking Matt Olson to lead off the seventh inning, his longest stint of the year.

Thompson allowed two hits, two walks and struck out a career-high nine batters in six-plus scoreless innings. He has allowed one run over nine innings in two appearances against the Braves this season.

Atlanta’s Charlie Morton needed 94 pitches to complete seven shutout innings. Morton gave up three hits, did not walk a batter and struck out nine. He has fanned 29 over his last 18 innings. Morton has not received a decision in four of his last five starts.

The Cubs lost first baseman Frank Schwindel with lower back tightness in the second inning. Schwindel grounded out and walked gingerly off the field. He was replaced in the lineup by P.J. Higgins.