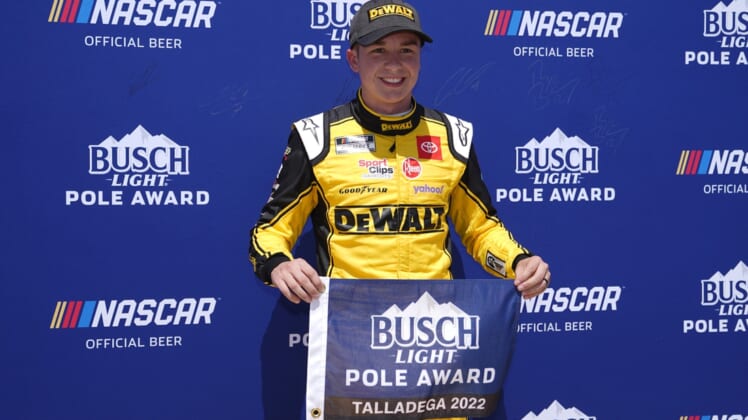 The all-JGR Toyota front row marks the first time the team has swept top qualifying honors (in a qualifying session) at Talladega. The teammates will lead the field to green in Sunday’s GEICO 500 (3 p.m. ET, FOX, MRN, SiriusXM NASCAR Radio).

“I can’t say I got anything (picking up speed) that was all my crew guys. I’m just very thankful to be in the position I am driving for Joe Gibbs Racing,” said Bell, whose best Talladega finish in four starts is fifth in last fall’s race.

“We’ve got a great team and this one is a pretty big thank you to [executive] Andy Graves at TRD (Toyota Racing Development). We ride him pretty hard, but I’ll give this engine a 10, Andy.”

Asked if he thought the wind gusts at the track ultimately made a difference in his pole-winning speed, the 27-year-old smiled and said, “it didn’t hurt.”

“Even from the first round to the second round I could tell my RPMs picked up really big going down the back straightaway then they were pretty flat going down the front straightaway, so I don’t’ know if it was an advantage to me, but definitely didn’t hurt,” said Bell, whose previous pole position came in March at Las Vegas Motor Speedway.

The 2021 NASCAR Xfinity Series champion Daniel Hemric — held the top qualifying position until the final two cars in the second round (Truex and Bell) and will start third in the No. 16 Kaulig Racing Chevrolet. Daniel Suarez was fourth fastest in the No. 99 Trackhouse Racing Chevrolet and reigning NASCAR Cup Series champion Kyle Larson was fifth fastest in the No. 5 Hendrick Motorsports. None of these top-five qualifiers has ever won a NASCAR Cup Series race at the track.

Of note, the top qualifying Ford driver was Joey Logano, who will roll off 13th in the No. 22 Team Penske Mustang on Sunday. Defending race winner, Brad Keselowski will start his No. 6 Roush Fenway Keselowski Ford from 15th position on the grid.

Keselowski is the winningest driver in the field with six victories.

Bubba Wallace earned his first career NASCAR Cup Series victory at Talladega Superspeedway last fall, yet the driver of the No. 23 23XI Toyota said he can’t help but re-live the huge moment in his career. Often. And it is a huge motivation this week.

“To be honest with you, I sit here and think about it a lot and people put so much emphasis on the win,” said Wallace, who advanced to final round qualifying and will start ninth for Sunday’s race.

“I know how good our speedway cars are and if (spotter) Freddie (Kraft) and I do what we can do at these speedway races like we’ve been doing then, I know we will have a shot to win. It’s a team effort. … As long as we stay in the race and maintain where we are at and just have a fighting chance, it will be a good day.

“That’s what I look forward to the most.”

Wallace’s only top-10 of 2022 is a runner-up finish in the season-opening DAYTONA 500 on the other “big track” on the schedule.

Three cars had problems in the pre-qualifying inspection for the NASCAR Cup Series. The No. 19 Joe Gibbs Racing Toyota driven by Martin Truex Jr and the No. 47 JTG Daugherty Chevrolet driven by Ricky Stenhouse Jr. both failed inspection twice and will lose pit selection.

A crew member from each team was also ejected.

The No. 77 Spire Motorsports Chevrolet driven by Landon Cassill failed inspection three times and has lost pit selection, lost the chance to qualify for the race, been issued a drive-through penalty in the race and had a crew member ejected.

Sentimental favorites will lead the field to green in Saturday afternoon’s NASCAR Xfinity Series race at Talladega. Jeffrey Earnhardt, grandson of the track’s all-time winningest driver, NASCAR Hall of Famer Dale Earnhardt, won the pole position for the Ag-Pro 300 and one of his late grandfather’s former crew chiefs, Larry McReynolds, will be calling the race from the pit box.

It’s the first time the Alabama-native McReynolds has served as crew chief after a heralded career in the role in the 1980s and ‘90s. He has worked as an analyst for FOX Sports NASCAR broadcasts and hosted shows on SiriusXM NASCAR Radio.

The pole-winning result for the No. 3 Richard Childress Racing Chevrolet is a career first for the 32-year old Earnhardt, who is running a part-time Xfinity Series schedule this year. His career best result is third place at Charlotte in 2019 driving for the Joe Gibbs Racing team.

“I tell ya, this is unbelievable man,” Earnhardt said after qualifying. “This is a dream of mine for years, to get this opportunity and everything else falling in place. The good Lord is taking care of us.”

In nine previous Talladega Xfinity Series starts, his best finish is 12th in 2015.

“I’m proud of him to get these opportunities and hope he makes the best of it today,” Jeffrey’s uncle, Dale Earnhardt Jr. said.