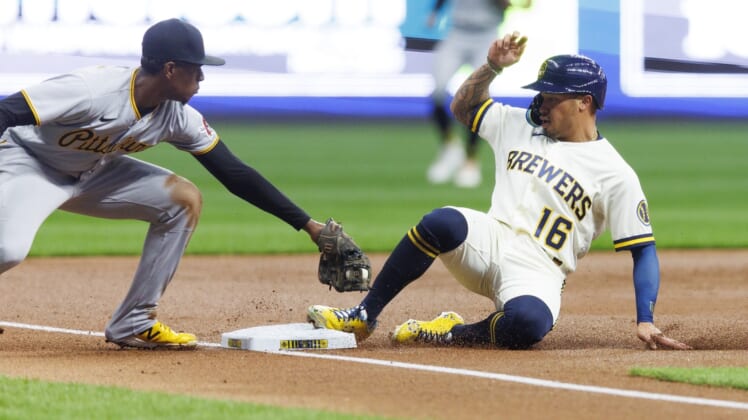 Christian Yelich hit a game-breaking grand slam and Eric Lauer allowed one run over six innings to pace the host Milwaukee Brewers to a 6-1 victory over the Pittsburgh Pirates on Monday night.

Yelich’s first homer of the season capped a five-run fourth inning that put Milwaukee in front by five in the opener of the three-games series.

In a 1-1 game, the Brewers’ Omar Narvaez singled with one out in the bottom of the fourth. Lorenzo Cain doubled off the outstretched glove of right fielder Cole Tucker, and Jace Peterson walked to load the bases.

Narvaez scored on Kolten Wong’s sacrifice fly to center to make it 2-1. Willy Adames walked to reload the bases, and Yelich ripped a 1-0 changeup from Zach Thompson 429 feet to right-center for his fourth career grand slam.

Lauer (1-0) gave up five hits, including Diego Castillo’s solo home run, while striking out five and walking one. Last season against Pittsburgh, Lauer went 2-0 with a 1.47 ERA in four games, including three starts.

Milwaukee’s Jandel Gustave followed with a scoreless seventh, Hoby Milner pitched around two singles in the eighth and Jose Urena finished with a perfect ninth.

Castillo brought the Pirates even at 1-1 with one out in top of the fourth with his first career home run in his eighth game. He sent a 1-2 pitch 360 feet the opposite way to right.

The Brewers took a 1-0 lead in the first when Wong and Adames opened with consecutive singles. Wong then scored from third on Thompson’s wild pitch.

Yelich, who was 1-for-11 in the first series on the homestand against the St. Louis Cardinals, also doubled and walked on Monday.

The Brewers managed just six hits en route to their second win in a row. The Pirates, who had won four of their previous five, finished with eight hits, including two apiece from Castillo and Daniel Vogelbach.