There’s a decent chance that the rebuilding Houston Rockets will look to pull off a Christian Wood trade ahead of February’s deadline.

While Wood has been tremendous in his first season-plus with Houston, he could net the team a pretty solid return.

Others will come calling. After all, we’re talking about a 26-year-old big who is averaging nearly 20 points to go with 10.3 rebounds on 50% shooting in 61 games with the Rockets. Below, we look at four ideal Christian Wood trade scenarios.

Whether the Rockets would like to add young talent or draft picks in any Wood trade remains to be seen. The guess here is that general manager Rafael Stone would accept either option. In this scenario, Houston picks up a 20-year-old wing in Avdija who could very well be a major building block for the rebuilding squad moving forward. The cost? Picking up Bertans’ bloated contract.

As for Washington, the team sits at 13-8 and is in win-now mode. Depth is not much of an issue, so moving off two rotational pieces isn’t a problem. Adding a potential 20-point scorer to a frontcourt that already includes Kyle Kuzma, Montrezl Harrell and Kentavious Caldwell-Pope would be an absolute boon. Add in the likes of Bradley Beal, Spencer Dinwiddie and Aaron Holiday in the backcourt, and there’s a lot to like in D.C.

Related: Find out where the Houston Rockets stand in our NBA power rankings

At 10-11 on the season, something has to change for the Blazers. Whether that includes firing embattled general manager Neil Olshey ahead of the February NBA trade deadline remains to be seen. That situation will also play a role in what Portland decides to do moving forward. What we do know is that the status quo is not working behind Damian Lillard in the Pacific Northwest. Acquiring Wood would give the Blazers an offensive-minded frontcourt presence to team up with Dame.

From Houston’s perspective, it picks up a still young Simons rather than going with an unproven commodity in terms of draft picks. Simons, 22, is averaging a career-best 12.6 points while shooting 39% from distance. He’d be a tremendous fit next to Jalen Green in the backcourt. Picking up Covington would also be an asset in that could be moved for pick(s).

This might seem like a bit too much for the Hornets to pay. That’s until we realize they would be getting out of Oubre’s contract for the 2022-23 season. He just has not panned out in a reserve role. Acquiring a score-first big would also help Charlotte even out its backcourt heavy roster by teaming Wood up with breakout wing Miles Bridges. It almost makes too much sense for Michael Jordan and Co.

The same could be said for Houston in that the rebuilding team would be adding two young potential core pieces, James Bouknight and P.J. Washington — the latter of whom would immediately start next to Jae’Sean Tate and Alperen Şengün in the frontcourt.

Speaking of having to get something done, Los Angeles sits at a disappointing 11-11 this season. No one has really stepped up outside of the top three with Anthony Davis and Russell Westbrook actually struggling through the first quarter of the campaign. If LeBron James wants his Lakers to be seen as a title contender moving forward, he’s going to push for a trade.

Yielding a talented young guard in Horton-Tucker would be a bitter pill to swallow. However, the addition of Wood could give AD that running partner he needs in the low-post while pretty much settling Los Angeles’ starting-five issues. 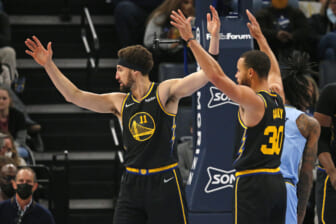